What I learned a year into my journey of raising bonsai seedlings.

A month before the COVID-19 pandemic took off, I decided to pick up a new hobby and test out my green thumb by getting into bonsai care. If you followed along with Part 1 of my journey, you may recall that bonsai is the centuries old practice of carefully pruning potted plants to maintain their shape and growth habits, but on a miniature scale. Since then, I’ve (unfortunately) had more failures than successes, so I would like to share what I learned so you can hopefully avoid some of the mistakes I’ve made!

I ended Part 1 of my journey by successfully germinating seeds of a few tree species that grew into sprouts which stood a few inches high. For a while they lived happily on the sunniest windowsill of my house (South-facing for those looking for the best spot for full-sun indoor plants), and stayed small but accumulated leaves to become healthy-looking plants.

About a few months into their life, COVID-19 changed things pretty drastically. Right before the pandemic, I left my home in Massachusetts (MA) to spend spring break with my partner in Pennsylvania (PA). While I was away, the world shut down and I was stuck in PA, and my little seedlings were left in the care of my roommate back in Massachusetts. She did a great job keeping them alive until my return to MA in the summer of 2020. To my surprise, they didn’t look very different from when I left them even though they had almost five months to keep growing (Fig. 1), which brings me to my first lesson… 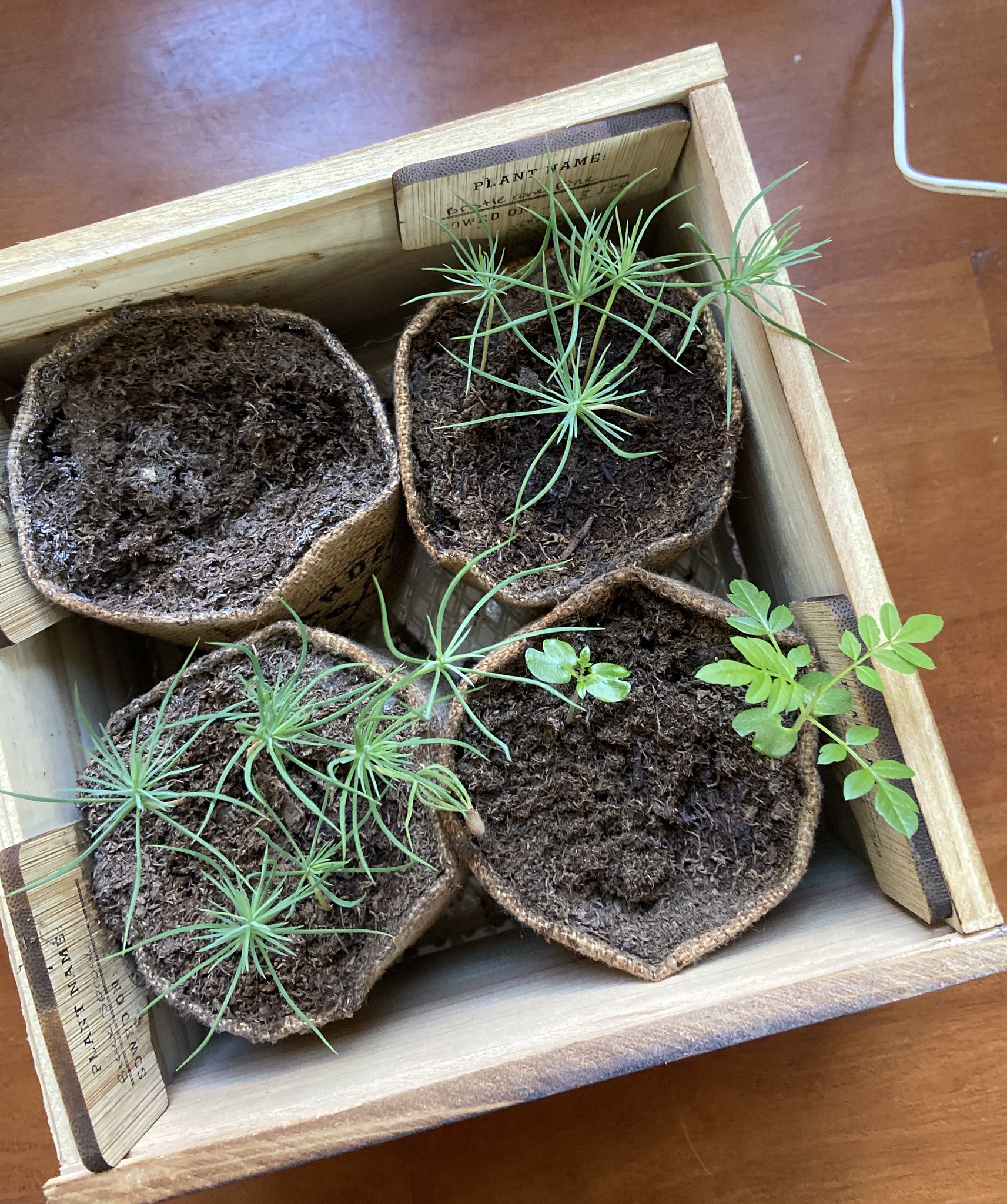 It’s pretty well known that bonsai is a practice that takes time. You’re basically stunting the growth of a tree that ordinarily would take 50 years to grow 70 feet tall. When I was first researching bonsai, I knew it would be a slow and steady process to start from seed, but I didn’t realize just how slow. So, if you’re following a similar path, keep an eye on your little seedlings but don’t expect much beyond a few inches of growth during the first year of your journey.

I was worried that my seedlings weren’t growing faster because they had outgrown their starter pots, so I pruned the weaker seedlings to give the healthier plants more room, and I decided to transplant a few into fresh material and larger containers. My local garden center has beautiful bonsai style pots (typically wide and shallow to force the roots to grow thicker instead of longer, Fig. 2) and a variety of materials to repot. If you’ve seen mature bonsai, you’ve probably noticed that most are planted in rocky substrate that bonsai caretakers manicure to look like a miniature landscape. I bought a bag of rock-based soil mix specifically for bonsai and took a stab at transplanting. 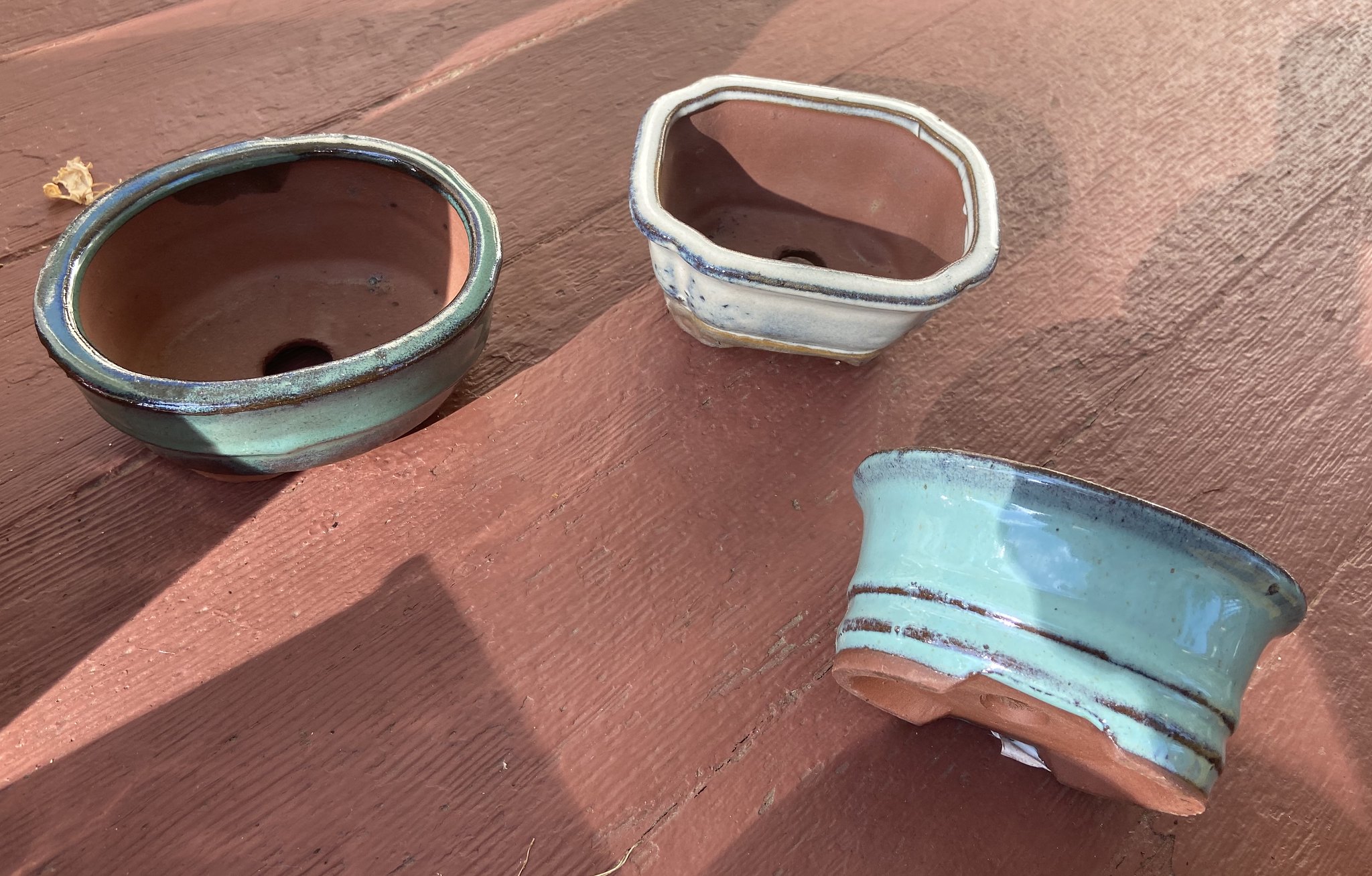 The seedlings were incredibly fine and fragile (Fig. 3), and I think they experienced quite a shock when moved from soft soil into rock-based substrate. If I could do things over, I would wait even longer (6-9 months from early sprouts) to transplant so the seedlings are heartier. I would also transplant to a larger container but with soil more similar to what they were living in prior to the transplant (or maybe a mix of soil and rocks to start). 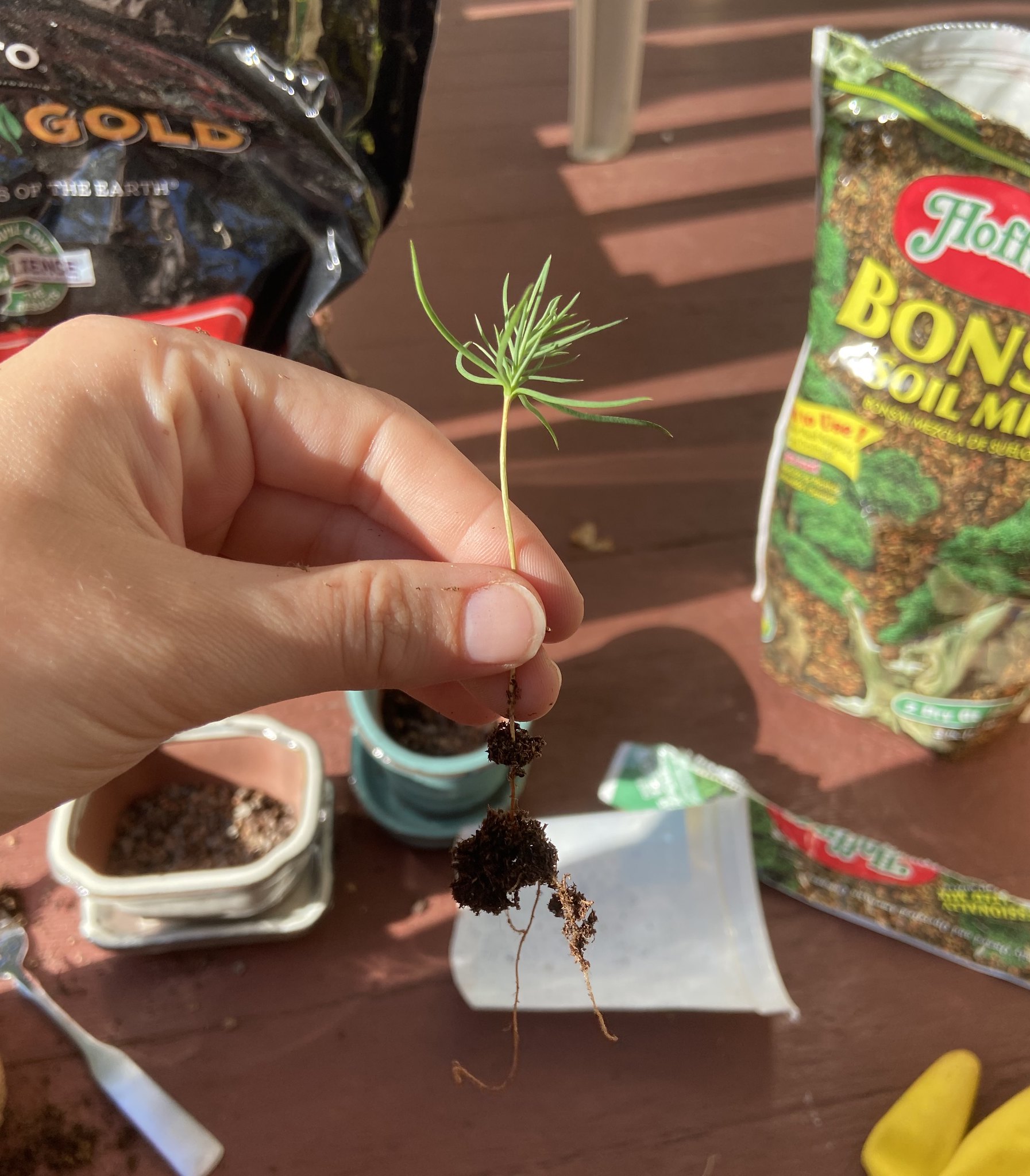 Figure. 3 - One of my bonsai seedlings during the transplant. (source: Eve Beaury) 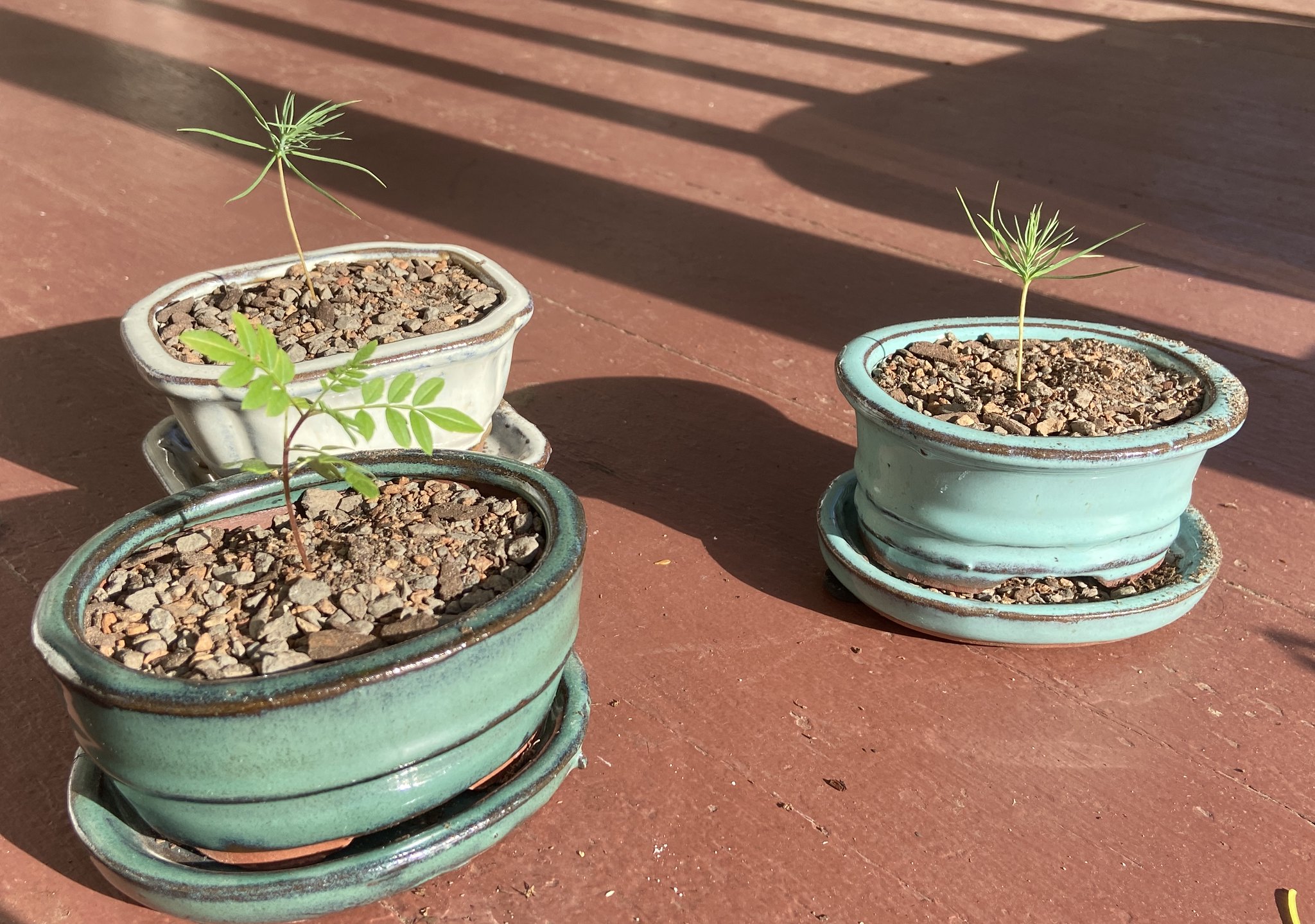 The seedlings survived transplant initially (Fig. 4), but I think this started a slow decline in their health. A few months later, all the seedlings that I transplanted withered and died. Here’s my hypothesis for why: the plants were so fine and the roots so fragile that they were unable to take hold in the rocks to expand their growth. The seedlings were likely 1) unable to stabilize themselves, 2) unable to get the nutrients they needed to keep growing (fertilized soil is richer in nutrients than the rock-based substrate), and 3) the rocks drained much more efficiently than soil, so they were probably also starved for water.

The good news: I kept a few seedlings in their original pots in case transplanting failed, and these continued to look happy and healthy (although they remained very small). The bad news: I left Massachusetts a second time to be with my family over the holidays, once again leaving my seedlings in the care of a friend watching over the house. Unfortunately I think the bonsai were missed in a few weeks of watering, and when I came back they had all died. SIGH! My fault for leaving them, but it was certainly not the end result I was hoping for. This brings me to my third and final lesson…

Part of the reason why I wrote about my experience germinating bonsai from seed is because I found it incredibly difficult to find information about what to do after germination. Since then, I’ve learned that you pretty much treat the seedlings as you would any other plant, so they become strong before you start pruning in bonsai style. If the pruning part is what excites you, I would recommend starting with a mature plant and going from there (particularly if you lack the patience to give your plants several years to grow before taking next steps).

One of the bright spots in this journey was connecting with people who found my first post while searching for information about how to start from seed. Hearing from you all motivated me to share what I learned in the second leg of this journey, which will hopefully help others avoid some of the mistakes I made. I haven’t decided if I’m brave enough to have another go at it, but best of luck to anyone out there venturing into the world of bonsai! 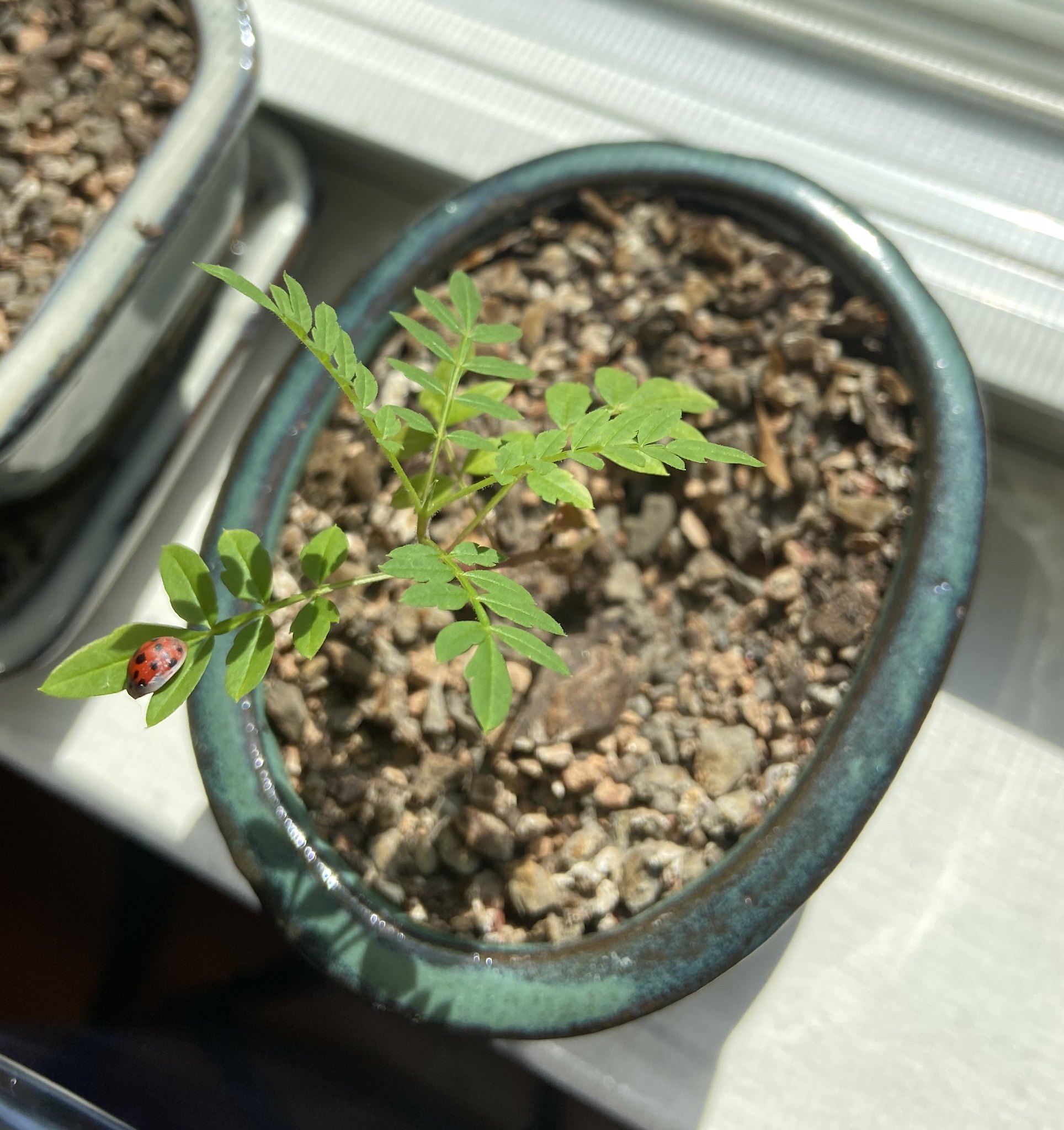 Figure. 5 - A ladybug resting on my seedling. (source: Eve Beaury)