Altering the genetic makeup of human-kind is a dangerous game to play.

The introduction of CRISPR-Cas9, a technology that allows scientists to edit genes, opened countless doors previously closed to the scientific community. Humans now hold divine power and are capable of creating genetically modified beings. Ethical issues aside, the power to create humans that are resistant to some of the most feared diseases is tempting. But is that a feasible reality, or a tantalizing fantasy? Is the ability to mold an “idyllic” human out of clay a dream come true for future parents, or the plot of a dystopian science fiction novel?

Until recently, the use of CRISPR in humans was limited to gene alteration in plants and bacteria [6]. However, the safe use of CRISPR as a treatment in humans is currently being evaluated by the FDA against diseases such as cancer and blood disorders [9]. But what is CRISPR? First discovered in E. coli, the CRISPR-Cas system acts as an immune system for bacteria. Cas genes are vital for the immune system function as they code for proteins that assist with DNA unwinding and snipping, giving these proteins the ability to deactivate any forgein agents that enter the bacteria. CRISPR, or “Clustered Regularly Interspaced Short Palindromic Repeats’’, are segments of DNA with short, repeated palindromic sequences (eg. ATA) which are separated by DNA segments dubbed “spacer DNA”. This “spacer DNA” is what recognizes invading viruses or pathogens as dangers to the cell. Think of the invading virus as a robber breaking into a store trying to steal precious diamonds, or the cell’s DNA. The CRISPR “spacer DNA” is the alarm system that recognizes an unauthorized person in the store, while the Cas proteins are the security guards that arrest the robber. The spacer DNA is able to recognize forgein invaders because it is a sequence from the invading species itself. This DNA has been adapted by the CRISPR-Cas system, mimicking the human immune system’s antibodies. In our metaphorical store, the adapted spacer DNA is a photo of the robber hung up to keep a record that this person has previously broken in [1]. 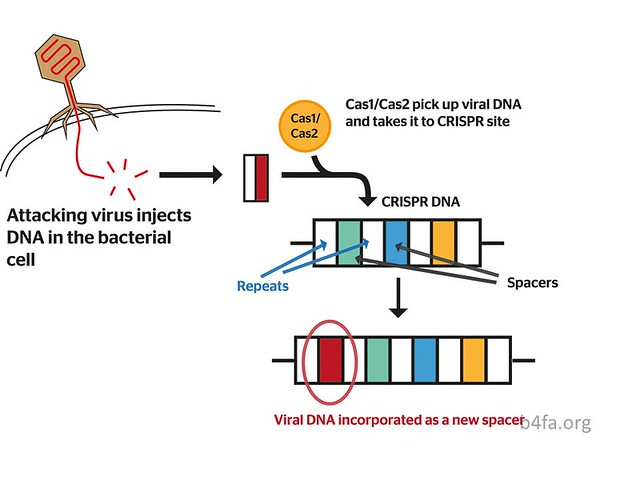 The most popular CRISPR complex is the CRISPR-Cas9 system, which was discovered in Streptococcus pyogenes by Jennifer Doudna and Emmanuelle Charpentier. Their lab realized that if humans can alter the spacer DNA to a sequence they desire, then CRISPR-cas9 can be used for gene editing [1].

This system differs slightly from the one described above, as the spacer DNA has two different components: the spacer DNA and a structural component that stabilizes the spacer DNA. Doudna and Charpentier combined these two components into a single piece, dubbed the “guide RNA,” thus creating a simple two-part system composed of the Cas9 protein and the guide RNA [1]. This is the system that has given humans the power to change their genomes at will. 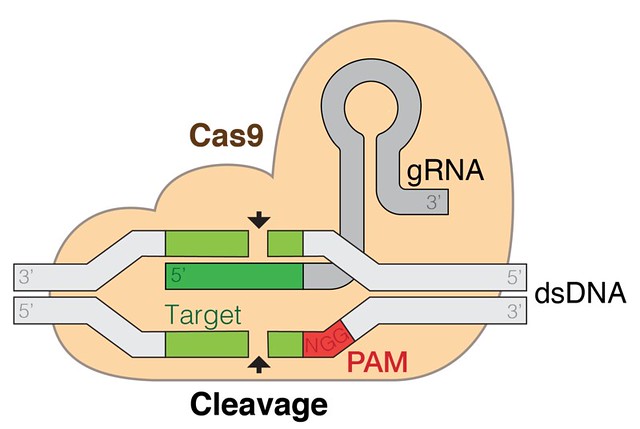 As previously mentioned, CRISPR has the potential to change how we treat many different ailments. Today, CRISPR is being applied to cancer treatments in the first ever CRISPR-based study in the US. This study is attempting to genetically modify a patient’s immune system to better recognize and effectively kill cancerous cells [3]. Additionally, CRISPR may offer a solution to organ shortages by allowing pig organs to be safely used for human transplant. By using CRISPR to inactivate porcine endogenous retroviruses (PERVs), there is potential for safe human transplantation without fear of introducing an HIV-related retrovirus to the organ recipient [4]. The use of this technology is inching toward genetically modifying humans. Attempts to create viable embryos carrying the healthy wild type MYBPC3 gene, which if mutated leads to abnormally thick and impaired heart muscles, have been successful [5].

If CRISPR is to be used for human genome modification, harmful consequences, such as accidental mutations and unexpected side-effects need to be considered [2]. Genetic modification can conceivably introduce the world to novel diseases, cause certain socially-deemed “undesirable” traits to become extinct, limit genetic diversity, and even enable genocide. In spite of these negative possibilities, there is hope of a bright future for CRISPR-based human genetic engineering. As of today, CRISPR is the most reliable and cost-effective way for scientists and doctors to modify DNA, providing the means to eradicate diseases, relieve suffering from painful health conditions, and cure ailments during the prenatal stages of life, which can provide healthier, longer life spans [6]. Humans should be cautious when running with scissors that can cut the delicate thread that nature spent epochs sewing. CRISPR is pioneering a new future for human health, but it will also alter our evolutionary trajectory with unforeseeable consequences.

« Bacteria: The Solution to Our Plastic Waste Problem?
Archive
The Lovebug Effect »