Take some time to appreciate the beauty and complexity of maps used in our everyday lives and in nearly every field of science.

Maps are awesome. With Google Earth, we can go from looking at the Earth as if we were astronauts in outer space, to our very own neighborhood in a moment. We have created maps of the cosmos, both outside us – the solar system, the moon, Mars – and within us – our brain connections. Maps are wonderfully compact displays of knowledge, transforming abstract relationships into concrete images and allowing us to share and update information efficiently. Thus, maps have become a foundational tool for nearly every field of science (Figure 1). 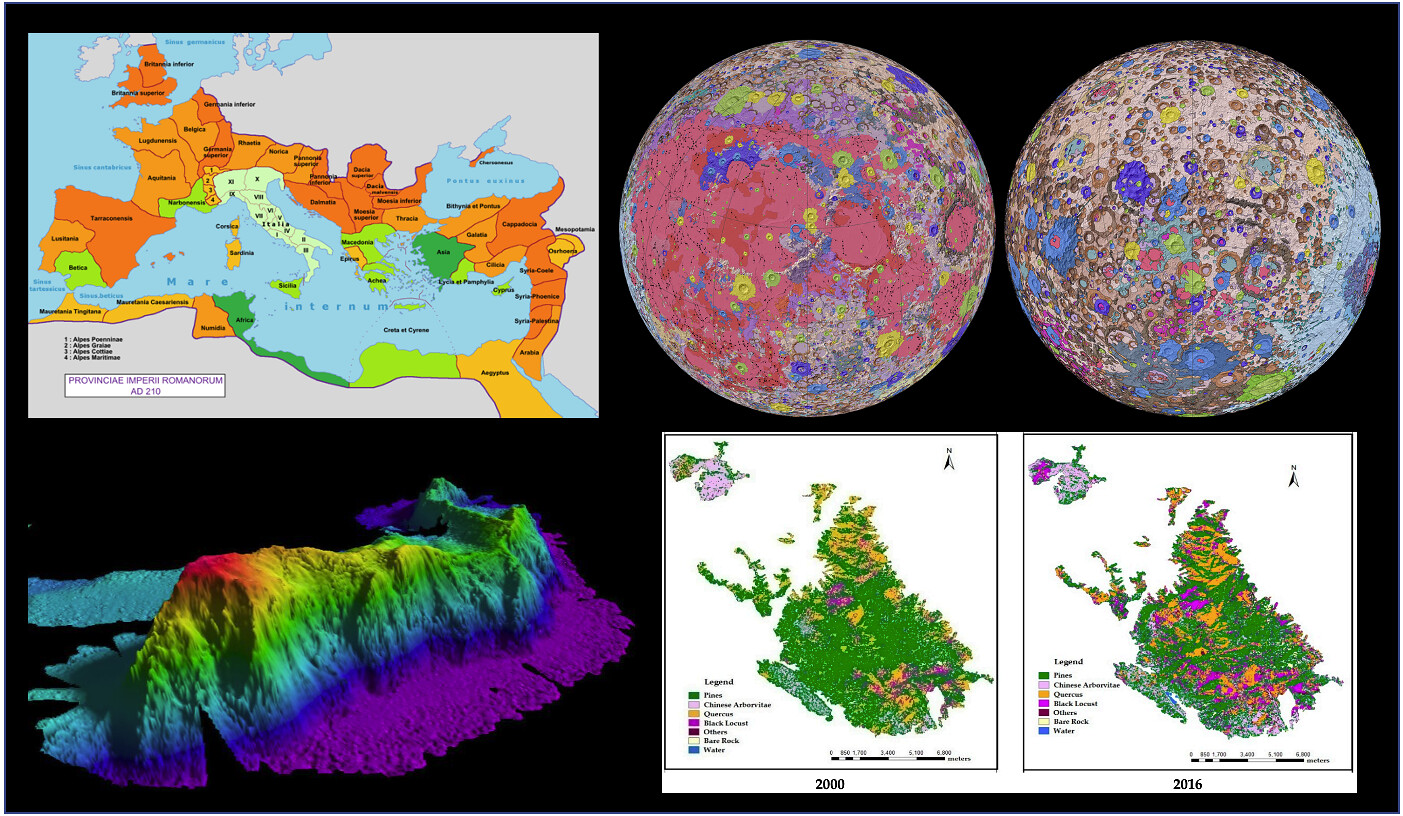 Figure 1. Examples of cool maps in different scientific fields. Clockwise from top left: A map of the Roman Empire circa 210 AD, source: Mandrak, via Wikimedia Commons; a geological map of the moon, source: USGS; a species distribution map for four tree species across two time points in Mt. Thai, China, source: ResearchGate; a topographical map of an underwater “hill” southeast of Guam that a US submarine crashed into in 2005, injuring 98 crewmembers, source: NOAA National Ocean Service.

Unlike most of our tools, our early map prototypes existed solely in our brains. Like many animals, we make mental maps of the spaces we inhabit, thanks to the part of our brains called the hippocampus. These “cognitive maps’’ help us navigate the world and can be updated with our experiences to become bigger and better. In order to accomplish this, our hippocampi literally grow in size! One study found that London taxi drivers who had spent more than 40 years in the occupation had significantly larger hippocampi than new drivers [1]. However, when it comes to impressive spatial navigation in the animal kingdom, even the most skilled taxi drivers pale in comparison to the Arctic Tern (Sterna paradisaea), which migrates from breeding grounds in the Arctic to the Antarctic and back every year (Figure 2). And somehow, they navigate this journey with a cognitive map in a brain smaller than a walnut. Scientists use remote tracking devices attached to individual birds’ feet to map their migration routes [2].

While we are not alone in our cognitive mapping abilities, we are unique in creating physical representations of these maps that allow us to share information and update our collective perception of space. When the first physical maps were drawn around 4000 years ago on clay tablets, they revolutionized how we interact with our environment and other people. The practice expanded in Ancient Greece around 100 A.D., when Claudius Ptolemaeus made the first 2-dimensional “world map” and wrote the Guide to Geography. 1300 years later, when people started to long-distance trade, the demand for more accurate maps increased. In 1569, at the dawn of the Scientific Revolution, Gerardus Mercator made one version of a world map that we still use today. The Mercator map projection widens the land masses and oceans towards the poles, distorting our perception so we can see all parts of the Earth at once.

No matter how much we collaborate or how fancy our tools get, no map is perfect. Our observations and measurements are limited, so even the most high-tech maps and globes are still just estimations and interpretations of true geography. Additionally, if we don’t map a certain area or place, it is much more difficult to learn about it or protect it. For example, consider Figure 3. The map on the left shows a typical map of the Netherlands and its coastline while the map on the right shows details of uses of the coastal waters, including water depth and ship traffic lines. One issue that ocean conservationists face is the difficulty in determining ocean territory and ownership, and therefore enforcing policies about using the waters sustainably. How can we adequately protect and maintain our oceans and coasts if the use and ownership of the area is not clear? Exploitation of unmapped areas and resources is much easier than those that are “on the map” and therefore under jurisdiction. Conservationists are working on mapping our waters in order to improve our interactions with them. 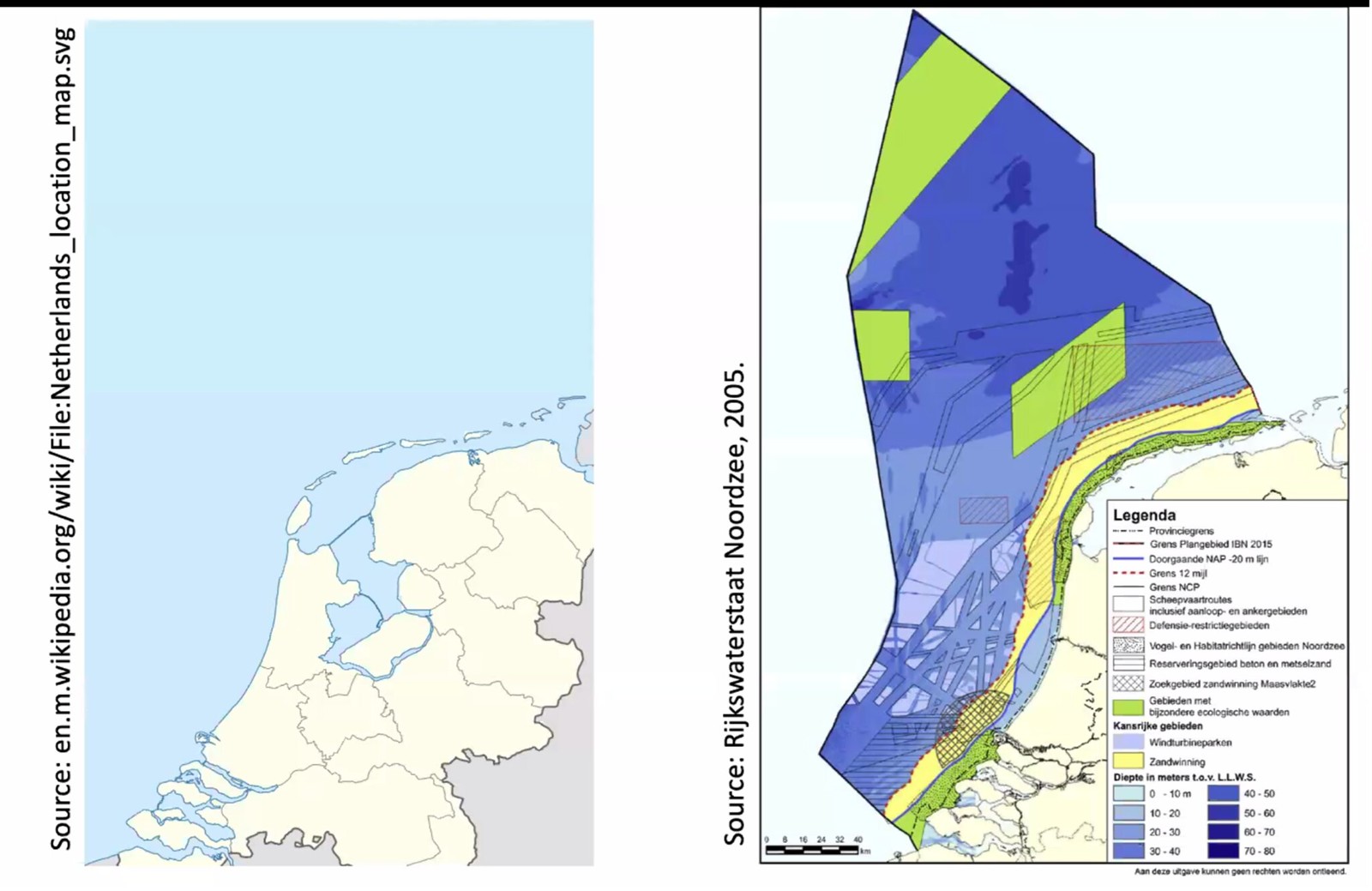 Figure 3. Two maps of the northwestern corner of the Netherlands, the one on the right including usage of the coastal waters. Maps like the one on the right help policy-makers better understand dynamic coastlines and waters that don’t clearly fall into state territory. Source: maps assembled by Drs. Lisa Campbell and Noella Gray.

Despite their limitations, maps improve how we engage with the world and how we conduct scientific studies. We live in a remarkable time when so many incredibly powerful maps are available to anyone with a smartphone. Compare that to just two hundred years ago when only a handful of people had seen a map of land beyond their neighborhood or region. With a few clicks, we can explore worlds and scientists can use and build new maps with relative ease, whether it is of cells, veins, cities, territories, or galaxies. Take a moment today to appreciate this incredible technology and explore more maps in the links below!

Other sites to explore maps:

“A brief history of maps” from the Smithsonian Magazine

An interactive map of the world’s oceans

« Why does it Taste like that? - How Saccharomyces Yeast Makes Beer
Archive
A breath of fresh air: How the great oxygenation event changed life on Earth forever »