How do tiny yeast give beer its big flavor? The metabolic assembly line of this little livestock significantly contributes to one of our oldest culinary creations.

As discussed in my earlier post [‘Til the Yeasts Come Home? - Domesticating Microbes] S. cerevisiae has a metabolic assembly line that we’ve come to shape over the years into a factory for ethanol production. Turning sugar into ethanol is, in metabolic terms, relatively simple. Yet, there is surprising nuance in the metabolic processing steps that produce organoleptic compounds, the molecules in food which create the sensory experience. So, for the domesticated microbe S. cerevisiae let’s walk through one of its most common uses, ethanol production in beer, and see how brewing overlaps with yeast’s metabolic assembly line to create the flavors in beer! 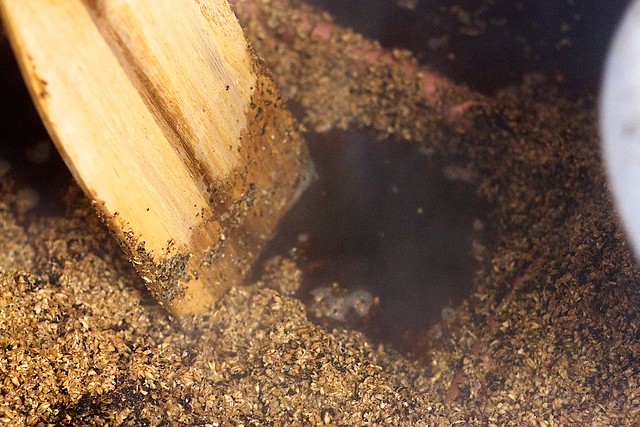 Figure 1. A traditional brewer’s mash is stirred with a paddle, preparing the raw materials for processing by your yeast of choice [Source cogdogblog at Wikimedia Commons]

1) The raw materials: The first step in any process is gathering the raw materials. In this case, yeast relies on us for material. Once the brew master identifies what grains you want to work with (most commonly barley or wheat, but sorghum and rye are also used) they are mixed together with water and heated in a process called mashing [7]. This step allows the grain’s natural enzymes, called amylases, to break down complex starches of the grain’s cell wall into simple, easily utilizable, sugars like glucose or maltose. These simple sugars can be transported into the yeast cell by small protein channels in its membrane, whereas the more complicated starches could not have passed this barrier [8]. The liquid from the mashing process, now called the wort, is then transferred to a tank where flavoring compounds like hops (or other herbs) and additional sugars if desired (such as lactose or fructose) can now be added [7]. The wort is then boiled again to concentrate it, sterilize it, and denature the amylases mentioned earlier. This step determines many of the attributes of the beer such as color and aroma. 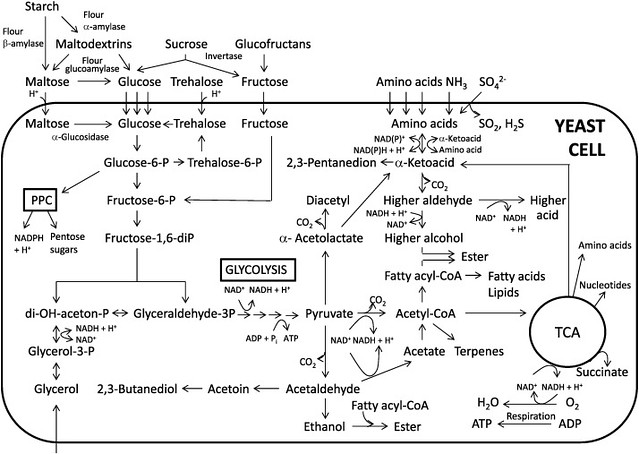 Figure 2. Simplified (if you believe it) overview of yeast metabolism [9].

Yeast are added to the sterilized and flavored wort and quickly begin gobbling up sugars and processing them into the simplest unit: glucose (Top left corner of Fig 2). The amount of sugar released in this step is important for determining the final alcohol content, as well as other potential molecules as we will later see [10-11]. Once the glucose is inside the yeast cell it is further processed by a series of enzymes, to make sure it can’t leave the cell. I’m going to skip over the exact details here but if you can recall back to high-school biology the metabolic processing of glucose is done by the same enzymes in the glycolysis pathway, showing that having to memorize them can eventually be useful! Once the glucose is processed, and locked into the cell, yeast can begin fermentation in earnest.

2) Malleable Precursors - Processing to pyruvate: The next branch point is the generation of pyruvate from the processed glucose, which at this point has broken into two molecules: Glyceraldehyde 3-phosphate & dihydroxyacetone phosphate. Pyruvate can be processed along three different pathways and here is where keeping the yeast metabolically ‘happy’ influences the final flavor and content of the beer.

In one scenario, the yeast don’t have enough sugar/food/energy to grow normally, so they convert the pyruvate into acetyl-CoA and feed into the TCA cycle. This keeps the yeast alive but produces the fewest organoleptic compounds.

A slightly more interesting scenario is the conversion of pyruvate to acetolactate to feed directly into amino acid synthesis. In either case the sugar is directed away from the brewer’s desired product, ethanol, and to the cells’ building blocks for their own growth. But in the second scenario the conditions are just a little off which can result in really interesting flavor profiles. In this case, the majority of sugar is converted into ethanol, but a small amount is converted into different compounds. One of the direct products arising from acetolactate conversion, diacetyl, is a ketone compound commonly associated with a ‘buttery’ flavor [6, 12]. If acetolactate is further processed you get higher alcohols (which taste harsher) but which themselves can be processed and degraded into a variety of interesting flavorful and aromatic ester compounds [6, 9]! Maintaining good growth conditions (temperature, sugar content, pH etc…) is what allows the cells the ‘luxury’ of converting their food into ethanol, rather than normal growth compounds. Playing with these conditions is one way to get variety in your final product! 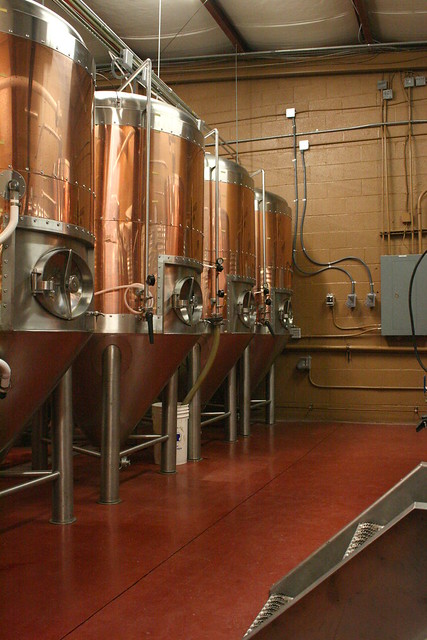 Figure 3. Unlike most traditional assembly lines you won’t find many belts and rollers during the yeast portion of beer production, most of the yeast “assembly line” takes place in tanks such as these. [Source Specious at Wikimedia Commons]

3) Putting the Product Together: Finally, the main event, ethanol production! If everything during fermentation has gone well, the yeast cells are primed and happy to convert processed sugar into ethanol! Pyruvate is processed to acetaldehyde by the enzyme pyruvate decarboxylase, which is then further processed to ethanol by alcohol dehydrogenase [9]. When acetaldehyde is overabundant, the brew might have fermented for insufficient time, ‘cooked’ at the wrong temperature, or even been contaminated by another yeast or bacteria [13]. However, these ‘mistakes’ can give beer a ‘cidery’ or apple flavor so certain brewers intentionally keep it.

4) Post-Production: Although we’ve reached the end of our (the beer consumer’s) desired assembly line, the yeast can keep going. If fermentation progresses too long, or other growth conditions are perturbed, the ethanol can be further metabolically processed into different esters which have aromatic and flavor profiles [6, 9, 14]. A small amount of this processing usually gives the beer unique flavors, and is common for beers that are aged, but too much can degrade the ethanol. 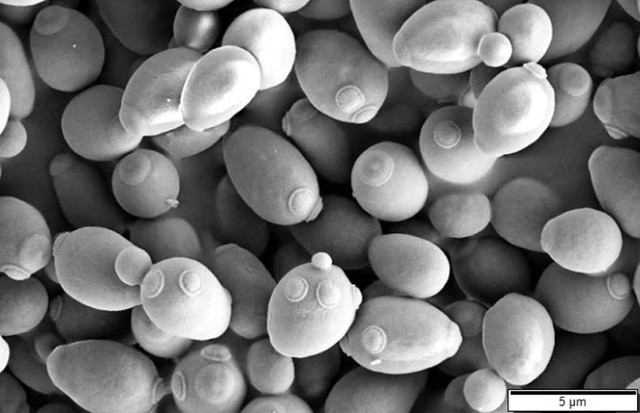 So, what causes a certain beer to taste the way it does? Of course the macro ingredients, the grains that compose the mash, hops/hop oil or other herbs, and any additional ingredients added. But an often overlooked contributor is the yeast themselves! Assuming that we are only adding S. cerevisiae then the conditions of the wort can impact the flavor profile of the beer [15]. This is also why the use of different yeast species during brewing can affect the final flavor. Minor differences in the efficiency or expression of these assembly line enzymes impacts the final levels of all the different metabolic products [16-18]. For these reasons a relatively new trend in the brewing field is engineering yeast strains to better produce intended flavor compounds [19-21]. The broad principles of this practice are not new, as historically individual brewers would cultivate a yeast strain using a technique called ‘backslopping’. These brewers, much in the same vein as early famers, continued to propagate the varieties of yeast that gave the right flavor, eventually selecting for the desired properties [22]. But now, with more advanced genetic engineering tools, brewers are tailor making strains to get exactly the properties they want and adding new possibilities for even more unique combinations [20, 23-24]! Fermentation is complex, but has great possibility for payoff. So next time you’re responsibly consuming your favorite beer, thank one of nature’s numerous little assembly lines: the mighty yeast’s metabolism.

For further reading on microbes and their factory potential give Employee of the Month - Hire a Microbe to Do Your Work a read!

[18] Haslbeck, Korbinian, et al. “The influence of brewing yeast strains on monoterpene alcohols and esters contributing to the citrus flavour of beer.” Journal of the Institute of Brewing 124.4 (2018): 403-415.