This is the unlikely biological love story of when a compound from the South American cinchona tree met a European distilled liquor fragrant with juniper botanicals in the tropical jungles of India!

It was yet another spring afternoon during the novel coronavirus COVID-19 pandemic when I stumbled on an interesting Twitter poll: if you have ingredients for just one classic cocktail, what would it be? The poll results indicated a startling proclivity for gin and tonic (fondly referred to as G&T) [1]. I couldn’t help but wonder if the apparent predisposition to this cocktail had anything to do with proclamations related to the pandemic.

In addition to toilet paper, pasta, and yeast flying off the shelves of grocery stores, reports indicated an uptick in consumer trends for a curious liquor store staple: tonic water. Coincidence? Probably not. For this was around the time when there were reports on the effectiveness of a common antimalarial, hydroxychloroquine, doing the rounds. Suddenly everyone’s interest was piqued about what was being touted, rather prematurely, as a miracle cure for the coronavirus.

Hydroxychloroquine is a class of synthetically manufactured antimalarial prophylactic (disease preventing) drugs that are related to the naturally occurring quinine. Tonic water is flavored with quinine, a compound that occurs naturally in the bark of Remijia (a genus of flowering plants) and the Cinchona tree (also called ‘fever tree’) that are native to parts of South America. The indigenous peoples of these tropical regions used the bitter and vile-tasting ground cinchona bark, made palatable with sweeteners and diluted with water, to treat ailments such as fevers and chills. This early version of tonic water reached Europe in the 16th century, and once it was determined to be an effective treatment against malaria, remained the staple antimalarial drug until about World War II. At that point, other drugs including chloroquine were formulated as effective alternatives with fewer side effects. Eventually, hydroxychloroquine was developed as a safer form of chloroquine. 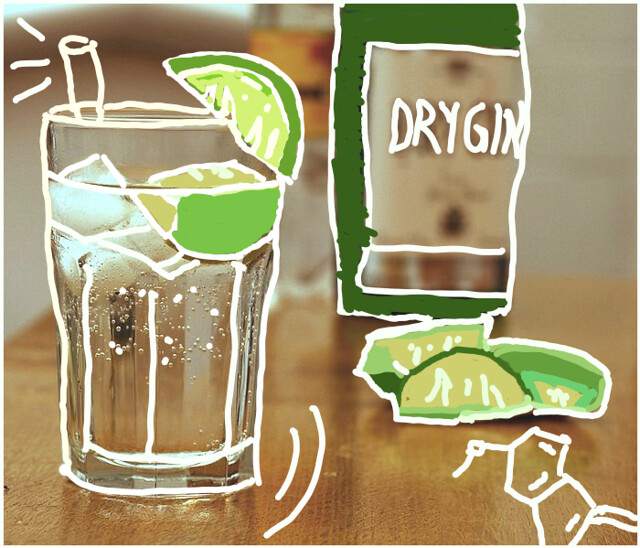 Figure 1 Your average G&T. For some, the golden ratio of gin:tonic is 1:3. Others swear that the botanicals in the booze result in a taste alchemy in the more spirited ratio of 1:1! A bogus taste test study suggests that “participants reported that they were less aware/able to taste the gin in a standard measure of gin and tonic” (although it’s not clear what this standard measure might be) [2]. This means that unlike certain spirits (like vodka), one would need a higher amount of gin in order to get a good whiff, against the heady backdrop of tonic.
(Graphic by Kadambari Devarajan)

On the other hand, gin had a much tamer and less circuitous history, albeit sharing its medicinal origins with tonic water. Gin is a distilled alcoholic spirit that is flavored with juniper berries, having its innocuous origins in Europe. The etymological root of gin is jenever, a medicinal liquor born in the Netherlands and Belgium. In the 17th and 18th centuries gin drinking achieved such massive popularity in England that the period became infamous as the Gin Craze [2]. 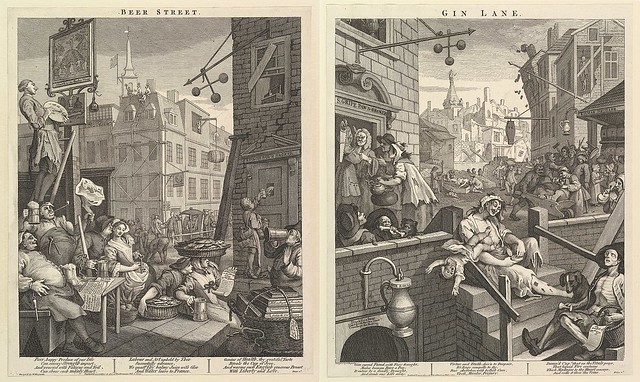 Figure 2 The famous Beer Street and Gin Lane prints by the 18th English artist William Hogarth, contrasting the perceived merits of drinking beer and ale (considered native) with the shocking, tragic decay and misery attributed to gin (considered foreign), during the Gin Craze. The gin crisis eventually led to what came to be known as the Gin Act, a British parliamentary order to restrict the consumption of spirits (including gin) in a bid to reduce rampant crime.
Source: Wikimedia Commons

The gin and tonic meet-cute happened far from both Europe and South America, serendipitously brought together by circumstances in India. Riddled with troublesome malaria in India and other tropical Anopheles mosquito-ridden areas, the bitter quinine-infused concoction was the only medical recourse possible for the British East India Company. They used this tonic to battle malarial parasites like Plasmodium falciparum. British troops stationed in India already had steady rations of gin. In a bid to make the vile-tasting medicinal tonic more palatable, a sweet mixture of gin, sugar (or honey and local fruits perhaps), water, and lemon juice was formulated. Thus was born the now beloved G&T! From love in the time of malaria.

The tonic water muddled to treat malaria by the British troops is a far cry from the cans of tonic water (think Canada Dry and Schweppes) of today. For one, today’s cocktail mixer staple 200 ml can of tonic water is so heavily diluted the quinine content in it is about 40-50 times lower (depending on body weight of the person being treated) than the amount needed for treatment as malaria prophylaxis in a day [1, 4]. This means a patient with malaria will have to guzzle down 40 or more cans worth of tonic water daily for a week (or more) in order to obtain sufficient quinine to equal antimalarial prophylaxis drugs. A whopping 40 odd cans worth of sugar water is a surefire recipe for disaster and likely to be a potent cocktail for dangerous (potentially lethal) side effects – like water intoxication! It’s also well above the limits prescribed by the Food and Drug Administration (FDA) for the sale of tonic water [1]. 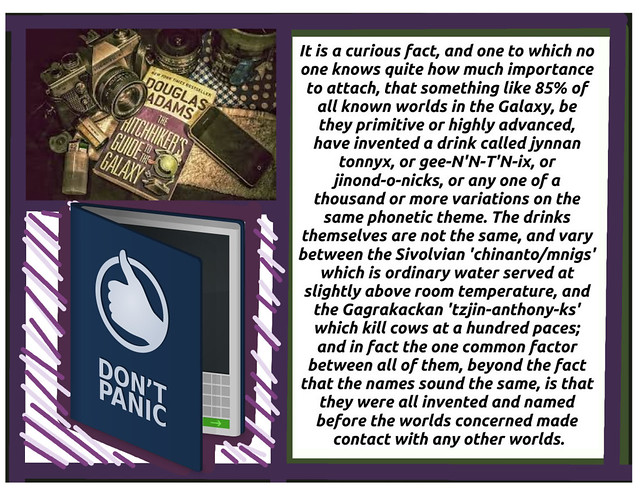 Figure 3 Pop culture meets pandemic! A quote referring to the literal universality of gin and tonic from the inimitable Douglas Adams in The Restaurant at the End of the Universe [3]. Hitchhiking the galaxy or persisting pandemic lockdowns, Don’t Panic is always reassuring.
(Graphic by Kadambari Devarajan)

The bottom line is buy just enough tonic water to make your cocktail and don’t fall prey to social media self-medication soirees and promising pandemic panaceas. Feel free to enjoy that refreshing glass of icy G&T, the faint bitterness of the quinine-flavored botanicals, diluted to perfection for that tango of taste with gin. A wedge of lemon or a slice of cucumber perhaps as garnish. Sip the cocktail to take the edge off and lift your spirits during these troubling times, gin with tonic as it’s meant to be.

The Biology of Booze ft. Tequila by Kadambari Devarajan

« My Bonsai Journey Part 1
Archive
The Pandemic That Changed The World: Many Questions and a Few Answers »