What even IS soap and how does using it to wash your hands prevent disease?

We’ve all been inundated with hand washing advice from an early age, even more so recently with the pervasive threat of COVID-19, but why are soap and water so effective against microscopic threats to our health? 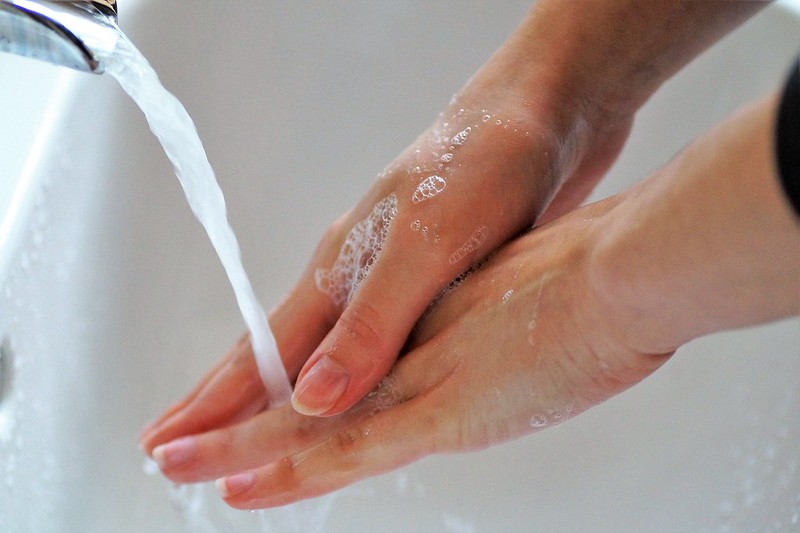 Figure 1. How can something as simple as washing your hands with soap and water prevent the spread of disease? Source ivabalk at pixabay

The answer, it turns out, arises from the interplay of some basic aspects of biology and chemistry. But first, an even more fundamental question, what is soap? That answer is deceptively tricky as there is a colloquial definition in addition to a technical one. When asked “What is soap?” most people would answer something along the lines of a cleaning solution, probably picturing the prototypical bar or the liquid soaps found near the edge of so many bathroom sinks. I consider this the colloquial definition: soap is something that cleans.

The technical definition delves into the science of *how * soap cleans. As defined by the International Union of Pure and Applied Chemistry, soap is “A salt of a fatty acid, saturated or unsaturated, containing at least eight carbon atoms or a mixture of such salts” [1]. This may sound technical, but it really just describes how the molecule is structured. Fatty acids are common biological molecules, containing a polar headgroup (Fig. 2 white circles) and a variable length carbon and hydrogen tail (Fig. 2 orange lines), with common examples being omega-3 and omega-6 fatty acids found in nuts and fish. When these compounds are added to water they organize themselves into structures called micelles, which are 3D globules in which the fatty acid tails are buried in the center and the polar heads form a shell around them, excluding water from the tails (Fig. 2). If the right conditions are met, the tails of the fatty acids can orient against each other, excluding water. This orientation results in two parallel layers of fatty acids called a bilayer. When a basic (as in high pH) compound, commonly lye, is added to either animal or plant fatty acids it initiates a process called saponification (literally the technical term for making soap) which results in soap being formed [2]! 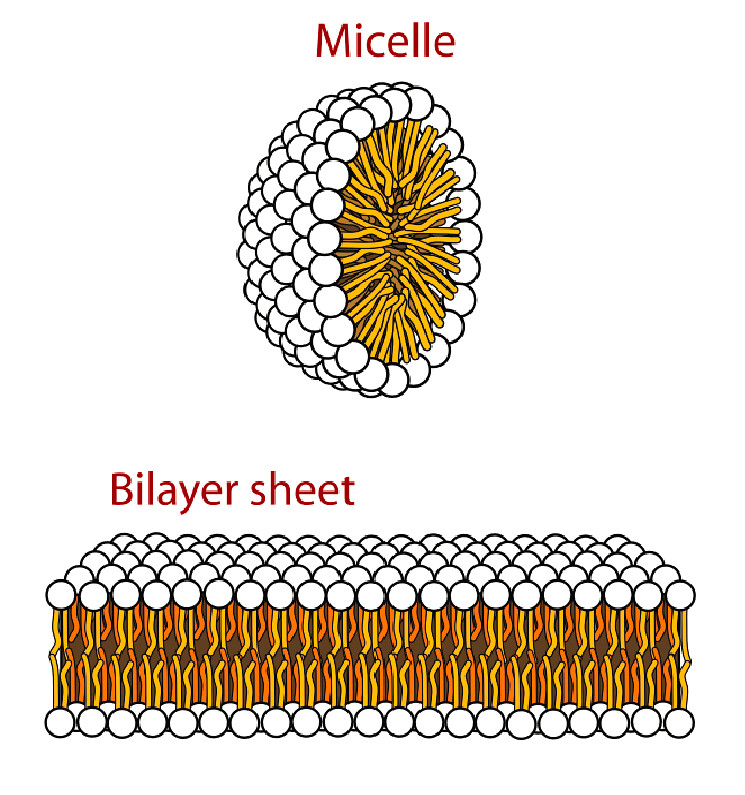 The organization of fatty acids into micelles or bilayers is a behavior inherent to the fatty acids themselves and the principle behind how soap can clean. Any dirt/grime that water itself cannot dissolve and carry away will be captured by these micelles, thus allowing the water to remove dirt and resulting in clean hands! When soap functions in this way, it can be called a detergent, or something with cleaning properties at dilute or watered down concentration(s) [3]. But how does this relate to disease-causative agents such as bacteria and viruses?

If you can recall your last biology class, cells are surrounded by a ‘plasma membrane’ composed of a special type of fatty acid called a phospholipid, as well as some proteins and carbohydrates. This layer protects the important contents inside the cell from harmful things in their environment. Soap disrupts this protective barrier via its aforementioned self-organization behavior. The similar chemical nature of the fatty acids in soap and that of the phospholipids in the plasma membrane of bacterial or viral cells means that soap readily interacts with the membrane. These interactions often result in local defects or complete removal of the membrane, exposing the internal contents of the cell to its environment, a slightly complicated way of saying soap kills and removes any bacteria on your hands during handwashing! Your own cells are left unharmed as the outermost layer of your skin has undergone a process called keratinization, which renders your skin resistant to the disruptive properties of soap [4].

Certain viruses, such as COVID-19 and influenza, are also susceptible to the disruptive properties of soap as they contain a phospholipid ‘viral envelope’. This envelope is actually made of stolen host cell membranes (as viruses do very little for themselves, shown in Fig. 3), and functions to not only protect the virus but also to evade the immune system, making enveloped viruses a sort of “Wolf in sheep’s clothing” [5]. This is why it is imperative to wash your hands when concerned with viruses; even if the soap doesn’t fully remove the virus, the disruption of the envelope renders the virus less effective, lowering your chances of contracting the disease! 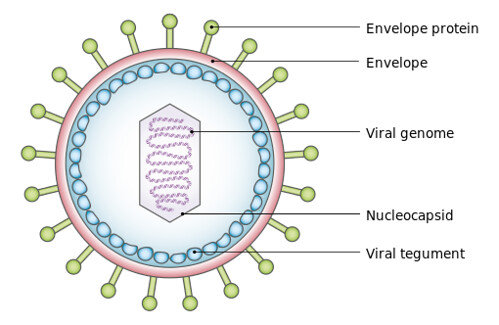 Figure 3. General structure of an enveloped virus, showing how the cell membrane taken from the host protects the virus’s capsid and genome. Source T4taylor at Wikimedia Commons

Alcohols, such as ethanol and isopropanol, are also capable of disrupting membranes but to a lesser degree than soap. Like soap, alcohol can disrupt bacteria’s plasma membrane (albeit through a different and less effective mechanism), but it is also capable of passing through it! In either case, the primary function of alcohol is as a ‘denaturant’: something that disrupts the structure of the bacteria or viruses’ proteins, causing them to lose their function [6]. To be effective, it is important that the alcohol concentration of the cleaning agent is between 60-90% by volume (with many recommending 70% as ideal) [7]. Outside this concentration range, alcohols are much less effective than soap.

I hope this has brought some clarity to how hand washing can reduce your chances of contracting a disease. Stay safe and disrupt those membranes!

[2] “Home.” How Is Soap Made, www.soapguild.org/consumers/how-soap-made.php.

[7] Walleser, Mitch. “Why Is 70% Isopropyl Alcohol (IPA) a Better Disinfectant than 99% Isopropanol, and What Is IPA Used For?” Production Automation Station, 20 Mar. 2020, blog.gotopac.com/2017/05/15/why-is-70-isopropyl-alcohol-ipa-a-better-disinfectant-than-99-isopropanol-and-what-is-ipa-used-for/.