The Dutch are leading the world in flood-risk mitigation through clever engineering and an eco-friendly mindset.

In my previous post about land reclamation in the Netherlands (Part 1), I explained how the Dutch have made massive changes to their landscape by building a series of large-scale water control structures such as dams and tide gates. These structures were largely built to protect the low-lying Netherlands from suffering frequent catastrophic floods. At the end of that post, I alluded to how such massive alterations to the environment will have inevitable consequences on local ecosystems. This is important to keep in mind as we simultaneously expand our population and engineering prowess. The question is not whether altering an entire ecosystem will have negative consequences; the question is which organisms and ecosystem services will be impacted and how severely. One could fill a textbook covering all the potential impacts of tide gates and dams, for this post I will focus on only a few of the repercussions.

The twice daily rising and falling of the tide is the driving force behind most physical, chemical, and biological processes in an estuary (where rivers and the sea meet). The outgoing tide also has the ability to carry unwanted materials, such as pollutants, out to sea to be diluted to less harmful concentrations [1]. These areas are often highly productive as gradients in salinity, temperature, light, pH and more create a variety of microhabitats that support diverse inhabitants.

The extreme case of tidal restriction

Completely eliminating the effect of the tide by walling off the sea (like was done to create Lake Grevelingen in 1971) is perhaps the most extreme version of tidal control (Fig. 1). Freshwater continued to flow into the system from the rainwater and streams, but saltwater from the sea was prevented from entering by the Brouwersdam. The sudden interruption of the tide resulted in large-scale die-offs from the rapid decrease of salinity. Hundreds of millions of sea worms and snails (lugworms, cockles, lanice, and mud snails) died within weeks of the removal of the tide [2]. We lack comprehensive data on the effects of this extreme tidal control on other species, but it is highly likely that other species that depended on the lugworms, cockles, lanice, or mud snails also felt side effects from their demise. 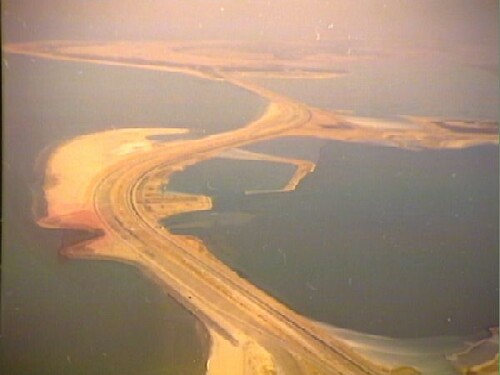 Fig. 1. The Brouwersdam which permanently closed off the former Brouwershavense Gat estuary from the North sea, converting it to the saltwater lake Grevelingenmeer in 1971 (source: Svdmolen via Wikimedia commons).

Beyond the immediate death of some intertidal species, other impacts were observed long after the dam was built. Eliminating tidal flushing causes water to be retained in the lake for 3-6 years, allowing pollutants to accumulate to much greater levels than when water was flushed out in only a few days [2]. Sea walls like the Brouwersdam also prevent migratory fishes from entering the system. Finally, since salt marshes are highly valuable in combating global climate change, loss of this habitat decreases the planet’s natural resilience to climate change. In response to these observed ecological consequences, alterations were made to this lake to partially restore seawater inflow, mitigating but not eliminating some of the impacts.

Not all of the impacts were decidedly negative, though. By eliminating the tide from sloshing around in the estuary, the waterbody was generally less turbulent, which lead to fewer particles churned up in the water [2]. Fewer particles in the water means the water is clearer, allowing for more light to penetrate deeper, which supported increased plant and algae growth. More plants and algae can positively influence the ecosystem by providing more oxygen, food, and habitat to support other organisms.

The modern approach: Living with water

The design and construction phases of the earliest Dutch water management projects were conducted in an era (1950s – 1970s) when ecological impacts were barely, if at all, considered. Fortunately for the Dutch (and the rest of us), they have adopted a more environmentally friendly approach in more recent decades. The current paradigm for Dutch water management is living with water rather than fighting with it [3]. It remains important to protect population centers and agricultural land from devastating floods, but the Dutch have devised new ways to achieve those goals that better preserves natural habitats too.

Rather than walling off the entire sea to shield against storm surge, the Dutch have created yet another engineering marvel in the Maeslantkering – a massive, moveable storm surge barrier that remains open unless threatened by rising seas, at which point the barrier can swing shut to protect the lowlands. The system can remain open to natural tidal flow and ship traffic the majority of the time, only closing for short periods of time when flood risk is high. This structure is just one example of several that can deploy when flood risk is high, but otherwise only moderately impede natural tidal flows, minimizing the disturbance to natural systems.

While minor reductions in tidal range can still have consequences for important species like shorebirds and oysters due to habitat loss, research suggests that the estuaries in the Netherlands appear to be fairly resilient to the recent moderate alterations to tidal range [4]. Complementing the moderate tidal restrictions and temporary defense barriers, the Dutch have also decided to reserve their most flood-prone land for less sensitive purposes. This is a key component of the “living with water” strategy. In the event of a massive storm, the lands most likely to suffer flooding have largely been reserved for uses like public parks that are less sensitive to flooding disturbances than private homes or critical infrastructure. This strategy is not only logical, it is commendable. The Dutch have decided to live with nature rather than purely try to beat it with engineering might (although, admittedly, they are using a lot of engineering might as well). The decision to consider natural ecosystem functions and design solutions that minimize environmental impacts is admirable. When borrowing engineering knowledge from the Dutch, other countries would be wise to learn from these priorities as well.

[1] Sanzone, Stephanie, and Anne McElroy. *Ecological impacts and evaluation criteria for the use of structures in marsh managemen*t. Marsh Management Subcommittee, Ecological Processes and Effects Committee, EPA Science Advisory Board, 1998.

« The Drama of Barotrauma: Blobfish, Rockfish, and More
Archive
Sound the Alarm! One Unique Way Primates Avoid Being Eaten »