How do neuroscientists make a certain population of cells stand out from a sea of them squished together in the brain? The tools are already in nature, no need to reinvent the wheel.

Why engineer something from scratch when our bodies have already figured out a way to do it? That’s the rationale that led to immunohistochemistry. Immunohistochemistry, or IHC for short, is a commonly used method to make a group of cells fluoresce a certain color so that they stand out from all other nearby cells. I have always used IHC following viral infusion into the brain to validate that it reached the cells I aimed for. (Neuroscientists can squirt a virus into the brain and use it to alter cellular activity. For example we can decrease activity to see if certain cells are necessary to produce certain outcomes. Don’t worry, these viruses don’t harm the rats.) One of my recent posts goes over the imprecision sometimes involved in brain surgery. To account for this imprecision, we must verify the location of our manipulations using IHC.

The goal of IHC is to target something specific that will only be found in a particular group of cells and make it a color that is observable under a microscope. How do we make something change color? Instead of creating a color from scratch and developing a process that adds that color to cells, scientists recognized that nature has already done it for them. Scientists years ago realized that some animals naturally glow and we can use that to our advantage. They isolated the green fluorescent protein (GFP) found in jellyfish, and put that in other cells from entirely different organisms to make them glow green. GFP was first isolated from the jellyfish Aequorea victoria, but there are many animals that fluoresce, and now we can get fluorescence from multiple sources that utilize similar mechanisms. This new way of using fluorescence was so eminent that the Nobel Prize in Chemistry was awarded to Roger Y. Tsien, Osamu Shimomura, and Martin Chalfie for the establishment of GFP as a valuable tool with broad applications [1-3]. 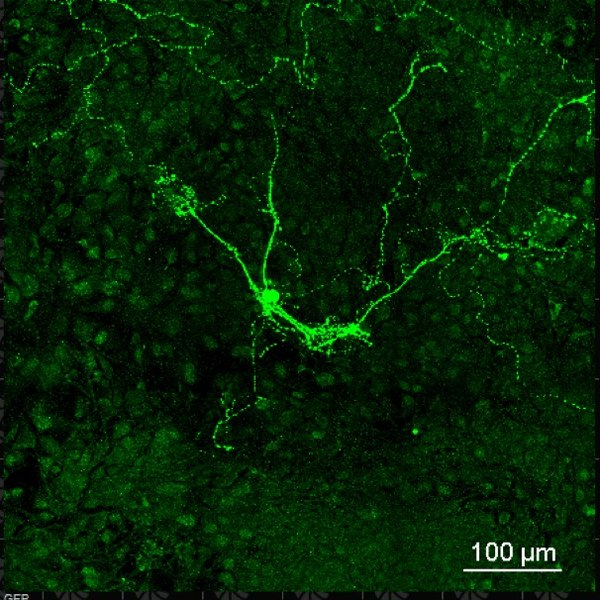 Figure 1. This cell in the mouse brain stem is not naturally green. A researcher added GFP and now we can see it stand out from its neighbors. Not only does GFP label the cell body, but it also allows us to look at how that cell interacts with other cells through dendrites and axons shown here. Source: Iguz, Wikimedia.

Being able to add one color to cells is a game changer, but once the fluorescence gates were opened, manipulating the structure of GFP allowed us to run through them with multiple colors. We can now co-label for multiple cell qualities by assigning each of them different fluorescent colors and looking under a microscope for which cells show which color fluorescence. In my research, for example, we want to know which cells were affected by the virus I put in the brain during a surgery as well as which cells have the machinery to produce the chemical norepinephrine. The goal is to identify that cells with the virus are norepinephrine-producing as well. In this case, I would target tyrosine hydroxylase (TH), which is necessary for the production of norepinephrine. Using this technology, I can label cells with the virus red, and cells that produce norepinephrine green. Then, I can look at the brain under a microscope and see if the cells glow with both red and green fluorescence, indicating that the norepinephrine cells have the virus. Had I accidentally gone a little too far down from the top of the skull when inserting the virus into the brain, I might have added the virus to a different population of cells and then I would not be able to include the data from that animal. That data would be the result of manipulating a different population of cells that I was not trying to affect. Ultimately, my conclusions would be different because I would be performing a different experiment by targeting this other group of cells that have a different job within the brain.

Figure 2. These images are the same cells labeled with both a green and a red fluorescent marker. They appear co-labeled by both colors in the merged panel that turns the label into a yellow color. Source: Ma et al. [4].

So now that we can change the color of cells, how do we specifically change the color of the particular cells that we want to look at? And if we are working with multiple colors, how do we know which ones signify what? Again, scientists turned to what was already before them in nature: the immune response. When you get sick, it is the process of your body recognizing foreign material and fighting it off. You already have a way for antibodies produced by your immune system to find and bind to anything that is recognized as not from your own body. Once antibodies bind to a foreign substance, naturally the next step would be destruction of that substance. However, scientists have figured out how to use these antibodies to target and bind, but stop there. No destruction.

Today, we can buy antibodies that were produced by tissue exposed to pretty much whatever we want. If I want an antibody for the virus that I put into a rat’s brain, I can buy it. I can also buy an antibody for proteins involved in the production of norepinephrine, like TH. If I add those antibodies to the brain tissue that I am working with, then they should both bind to the same cells. Unfortunately, they won’t fluoresce. So I add antibodies for whatever organism those antibodies came from that have a fluorescent marker like the GFP from earlier. This means that I can start with an anti-virus primary antibody from a mouse (primary because it’s added to the tissue first) that will bind to the virus I put into a rat. Then, add an anti-mouse secondary red fluorescent antibody from a donkey that will bind to the primary antibody because it targets and binds to anything in the rat tissue that came from a mouse. Now, any cells that were affected by the virus will be a red fluorescent color. At the same time, I can add an anti-TH primary antibody from a rabbit that will bind to cells that produce norepinephrine. Then I would add an anti-rabbit secondary green fluorescent antibody from a donkey. Now, any cells that produce norepinephrine should show up green, and if you’ve done your brain surgery well, then the green cells will also be red under the appropriate microscope filters. Remember, the goal was to affect the norepinephrine producing cells with a virus, so we want both colors in the same cells. The secondary antibodies can both come from donkeys if we don’t plan to add a tertiary antibody. If we needed a tertiary, which is totally possible, then we would have to incubate one of the secondary antibodies in another organism like a sheep to tell them apart. 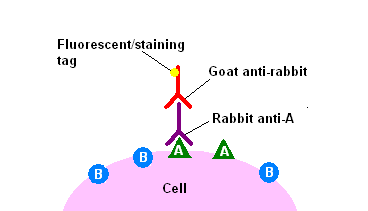 With a little bit of creative thinking, we have the ability to use things in nature as tools for research. The main example in this article is the immune system, but I also mentioned viruses as tools we use to change the frequency of cell activity. Viruses in general are bad for us, but scientists figured out a way to make them harmless and use their machinery to deliver new pieces of genetic material to an animal. Rabies is now used as a tracing mechanism to see where one cell is getting information from. It’s all the same idea of having a question that needs to be solved or a method that needs to be created, and looking in the world around you to find a solution. Viruses aren’t bad if you use them for good, and the immune system can be productive rather than destructive if you manipulate it appropriately.