“In some primate species, infants are born with conspicuous coats that fade to normal adult coloration over time. What could be causing these uniquely colored infants? What do species with natal coats all have in common?”

If you have ever been to a zoo that has silvery langurs or black-and-white colobus monkeys, you might have had the wonderful opportunity to see one of their infants. They aren’t difficult to spot: silvery langur infants are bright orange! Black and white colobus infants are snowy white, in great contrast to their parents’ mostly black coats. This phenomenon is known as conspicuous natal coat coloration. Several primate species including some monkey, gibbon, and lemur species have infants born with coats that contrast sharply with adult coloration, typically making them very easy to see amongst other members of their group. Despite these numerous examples among primate species, this is actually quite rare in other non-primate animals. So why does this happen in primates? Researchers have been considering the evolutionary advantage of brightly colored infants for decades, and a few hypotheses remain popular. 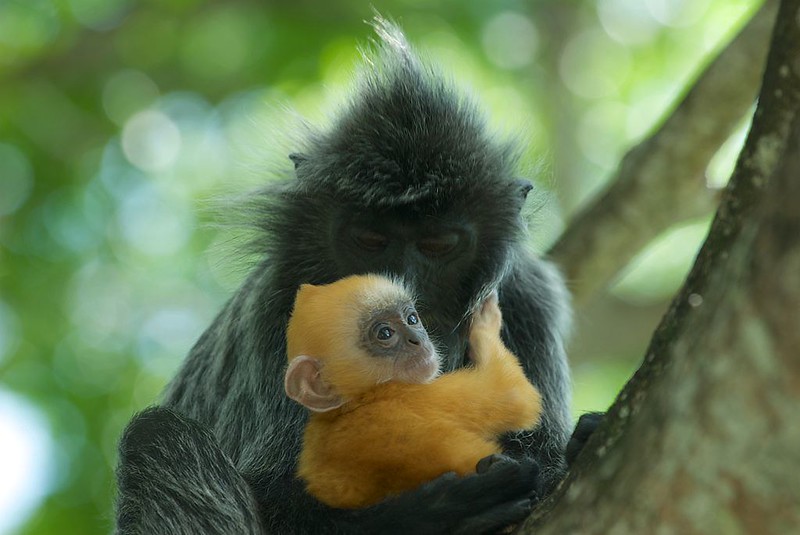 Figure 1. A silvery langur adult and infant. The infants are born with bright orange hair that darkens to normal adult coloration as they develop. Photo credit: Peter Gronemann

Researchers have noticed that these unique natal coats begin to change to adult coats as the offspring becomes more independent and spends less time attached to its mother [1]. Many hypotheses therefore stem from the notion that the conspicuous natal coat is somehow advantageous during the most vulnerable period of the offspring’s life. A commonly espoused hypothesis is the alloparental hypothesis. It posits that these bright natal coats attract the attention and increased care of other group members, which may protect the infant against infanticidal attacks by males [2]. Many of the Asian and African monkey species whose infants have conspicuous natal coats also have high rates of infanticide by males, which could drive selection for bright coats that attract attention, care, and defensive behaviors by other group members [2].

The infant defense hypothesis builds on this idea, but suggests that conspicuous natal coat colors actually act as a warning signal to infanticidal males that the group will vigorously defend these infants [1]. According to this hypothesis we should see a correlation between the types of infanticidal males (within-group or outsiders) and the type of conspicuous natal coat color (more subtle or highly flamboyant).

Another hypothesis called the paternity cloak hypothesis again focuses on infanticide risk, but states that conspicuous natal coats obscure males’ ability to identify their offspring from other unrelated infants [1]. Males only kill unrelated offspring because they want to make the mothers reproductively active again and maximize the number of offspring they have. A really bright natal coat could mask or delay the development of heritable phenotypic traits passed on from their parents. By obscuring paternity, bright natal coats can protect an infant from infanticide since the males cannot effectively visually assess whether or not they are related. 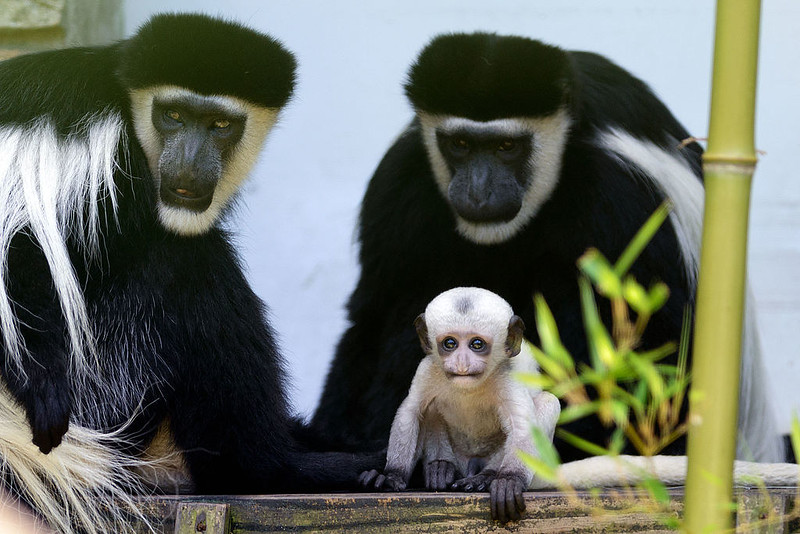 Figure 2. Black and white colobus monkey infants are born with pure white coats, and develop their black hair starting along their head and upper body. Infants are handled extensively by other members of the group while they are still in their natal coat—adults pay a lot of attention to their bright, light color! Photo credit: Eric Kilby

One study suggests that female aggression could shape the development of a different type of natal coat coloration. This study focuses on sexually dichromatic red-fronted lemurs, in which the adults of both sexes have different coat colors. The researchers observed that red-fronted lemur infants are all born with the adult male coat color regardless of sex [4]. Female infants’ coat changes from the male coloration to the adult female coloration once they are a little older. In light of the high rates of female aggression and competition within this species of lemur, the researchers suggest that this visual sexual mimicry could reduce aggression by adult females against female infants when they are most vulnerable [4].

The exact selective advantages of conspicuous natal coats in primates remain a mystery. It is nonetheless clear from its repeated appearance throughout the order that this is a beneficial trait. We do know that it frequently appears in primate species who deal with infanticide or high rates of competition and aggression, and that these bright colors disappear with increasing independence. This suggests that conspicuous natal coloration has a broadly protective function for primate infants. Primates are unique among mammals in that they overall have better visual acuity and more advanced color vision. Combined with the particularly complex and varied social structures present in primates, it makes sense that variation in coat color could be repeatedly exploited as visually detectable social cues. This is just one of the many ways in which primate coat color is adaptively shaped by social behavior.

Interested in learning more about primate coloration? Check out this article in That’s Life Science!

[2] Hrdy, Sarah Blaffer. “Care and exploitation of nonhuman primate infants by conspecifics other than the mother.” In Advances in the Study of Behavior, vol. 6, pp. 101-158. Academic Press, 1976.

[4] Barthold, Julia, Claudia Fichtel, and Peter Kappeler. “What is it going to be? Pattern and potential function of natal coat change in sexually dichromatic redfronted lemurs (Eulemur fulvus rufu*s).“ American Journal of Physical Anthropology* 138, no. 1 (2009): 1-10.