The ocean is shifting along with a changing climate. What does that mean for the local seafood on your plate and in the market?

When you think about your ideal plate of seafood, what do you imagine? A bright red lobster? Grilled pink salmon? A beautiful fillet of swordfish? Whatever your preferences are, it’s important to know that the price and availability of seafood on your plate depends on what can be caught in the ocean. Due to climate change, new temperature regimes are altering coastal ecosystems, which means the food on your plate will be altered as well.

There are several ways we are already seeing concerning changes to natural populations, including changes in the prevalence of disease and shifts in where certain species are typically found.

Disease affects animals and plants in the ocean just as it affects those on land! Climate change may cause increased stress on marine animals, making them more susceptible to pathogens. Researchers have already observed changes in disease occurrence under climate change in many marine organisms, including coral reefs, oysters, abalone, and fishes [1]. American lobsters, a popular New England dish, are affected by several shell diseases, including epizootic shell disease (ESD) [2]. ESD sets in when bacteria create lesions on lobster shells, enabling other bacteria and fungi to enter and further damage the shell. This disease can be fatal, resulting in fewer lobsters in the wild [3].

In warmer temperatures, researchers found that lobsters develop thinner shells [2]. This, combined with a faster bacterial growth at warmer temperatures, could be responsible for a higher occurrence of ESD in natural populations. As a result of climate change, we may expect lower availability and even pricier lobster as their populations are increasingly impacted by disease. 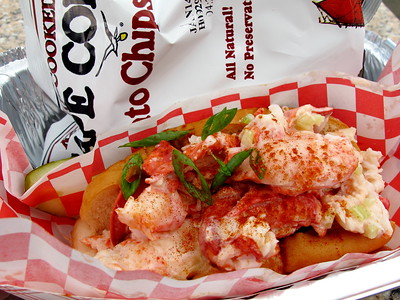 Species on the Move

Where a species is found is a result of many factors, including the environment it can survive in and the other species it interacts with (e.g. predators, prey, competitors). Therefore, when climate changes, species are driven to shift where they live. This has already been observed in many taxa around the world [4]. When it comes to fish, we will see species we have depended on as a source for food and income moving toward the poles, and new species entering our ecosystems. This can have positive or negative effects [5]. A loss of a familiar species can be difficult for fishermen, whose historical knowledge and investment in specialized fishing gear require a reliable supply of those fishes. Additionally, seafood suppliers and consumers may only be interested in the fish they know. One study found that New England seafood consumers prefer to buy familiar fish (e.g. Atlantic cod, haddock) compared to abundant, underfished species (e.g. silver hake, spiny dogfish, pollock, and Atlantic mackerel) [6].

Given these challenges, it is important for all of us to learn how to adapt our practices to climate change. As new species arrive, there are opportunities to exploit different types of fish to offset losses of historical species. However, changes must be made in the fishing fleet’s gear and knowledge in order to harvest the newcomers. What is available in the market and in restaurants will likely shift as well. Which species will be more or less common will be difficult to predict, as not all species shift their distributions at equal rates. For example, one study found that shorter-lived, smaller fishes tend to shift poleward at a faster rate than longer-lived, larger species [7]. This means that within a given ecosystem, some species will leave, some will stay, and some new species will enter. It is difficult to know what novel interactions will arise between species and what it will mean for the ecosystem (and our plates!) as a whole. 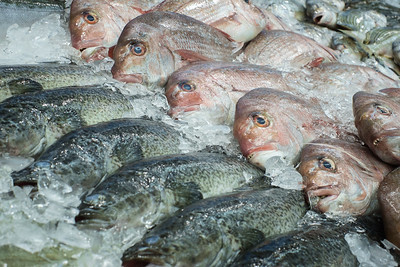 This is only a taste of the changes to come with climate change, but you can hopefully see that even these two impact will have substantial impacts on our natural communities. In order for the fishing industry to successfully adapt to climate change, consumers (that’s us!) will have to get used to the idea that what’s on our plate will change over time, and that’s okay.

If you live in the New England area and could use guidance on what local fish to eat, check out Our Wicked Fish. This site aims to improve sustainability (ocean-to-table) by connecting consumers to local fish and is run by a UMass Amherst graduate student! Another great resource is Eating with the Ecosystem.

For even more posts on seafood, check out other TLS posts: “Is it possible to eat too much fish?”, “Do we have all the data needed to make safe choices about seafood?”, using DNA to find seafood fraud, and diversifying aquaculture!

« Managing Up
Archive
The Power of Fear: Four Ways Being Scared Affects Wildlife »