Sometimes the best defense from predators is to stay in plain sight.

The most intuitive way for prey animals to avoid detection from predators is to disguise their appearance with their natural environment, a strategy called crypsis. After all, if a prey animal remains hidden, there will be less chance of getting eaten! However, some animals employ a different technique: conspicuous warning coloration, often referred to as aposematism (Fig. 1). 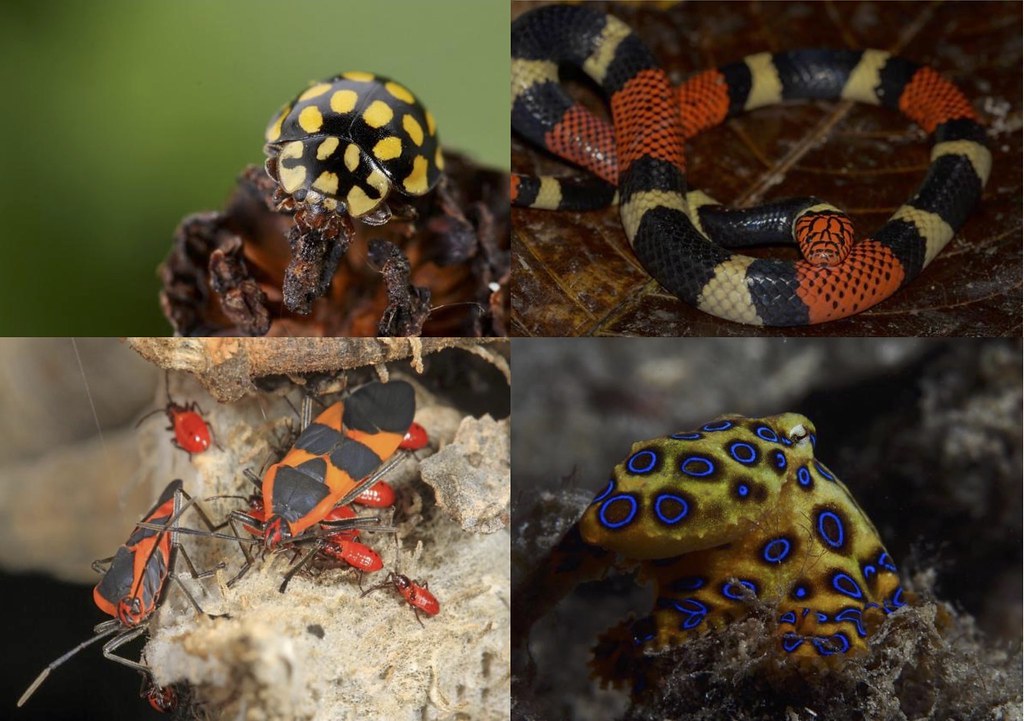 From a predator’s perspective, unprofitable prey are those that are potentially dangerous from harboring special defenses, such as toxins or weapons. Thus, a wide range of animals advertise their unprofitability to predators using conspicuous aposematic warning signals such as bright colors, loud sounds, or harsh odors (Fig. 2) [1]. Some animals are able to produce toxins endogenously (originating within the organism), or exogenously by sequestering or repurposing toxic compounds from their diet [2]. Many toxic substances in nature taste bitter, and thus are distasteful to animals. For this reason, prey distastefulness has been found to signal toxicity to predators, and this bitter distastefulness has often been paired with other warning signals [3]. Visual aposematic signals, such as bright colors and high contrast patterns, are particularly interesting because they make prey easy to spot for common predators such as birds (Fig. 3). Interestingly, many predators can quickly learn to avoid colorful yet distasteful prey after encountering them when foraging [4]. In simple terms, prey animals are able to avoid attack if they can evolve to advertise their toxicity with bright color patterns. 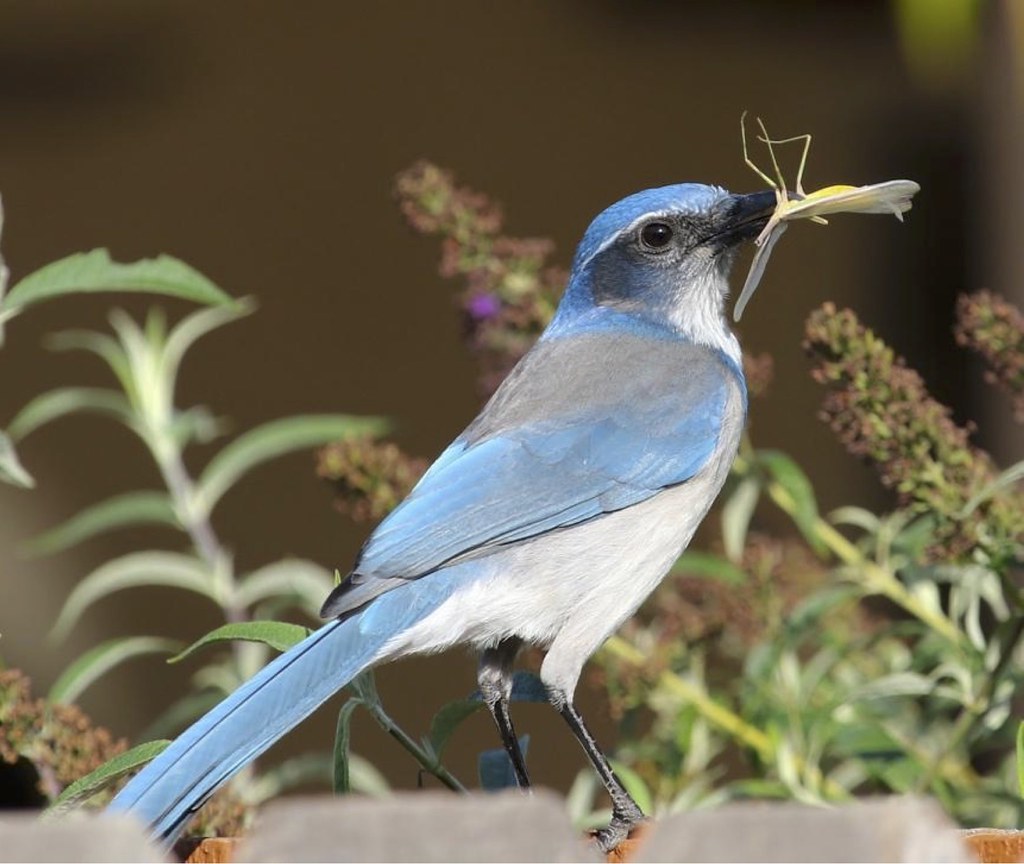 When an animal advertises their unprofitability with visual warning signals, they are honestly signaling danger to predators [5]. However, wouldn’t it be easier for populations to develop these warning colors without having to develop actual defenses? Some animals, like the hoverfly, mimic toxic wasps and thus are dishonest signalers (Fig. 4). These mimics are able to trick predators into thinking they are unprofitable, despite being a great snack. Let’s look into the issue of dishonest signaling and mimicry. 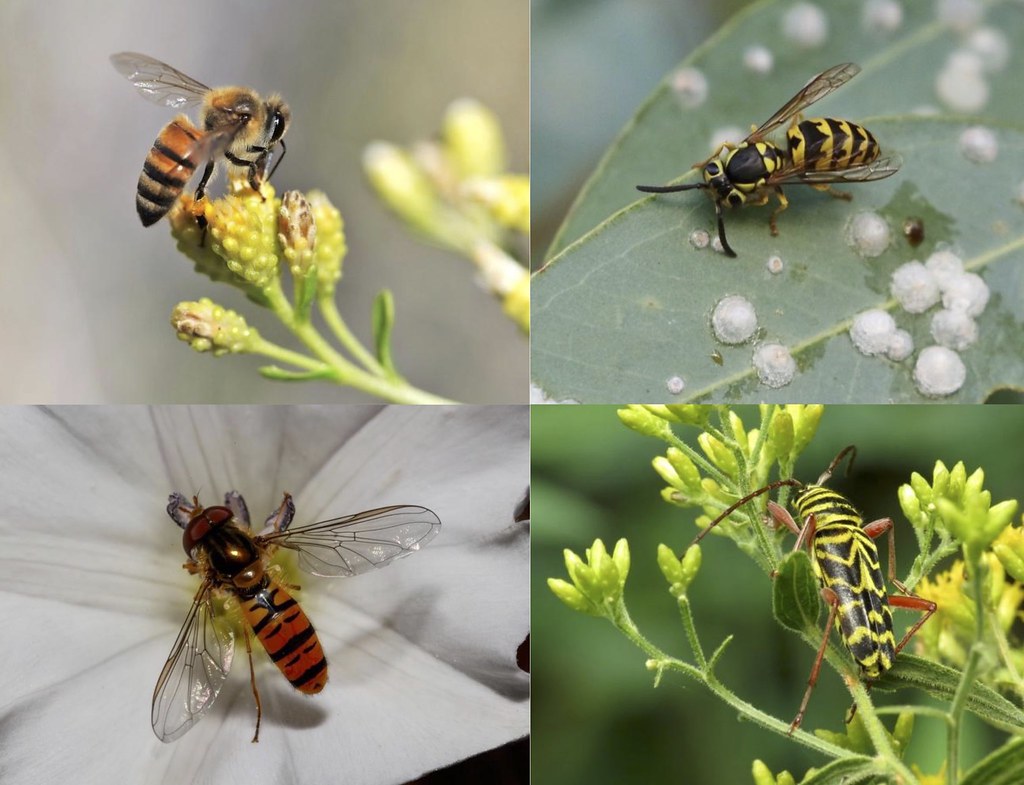 Müllerian mimicry is when two animals evolve similar warning signals when they are predated upon by a common predator, which is thought to expedite predator learning to reduce attack likelihood [6]. To conceptualize this, imagine two species of toxic butterfly that coevolve to have bright orange spots (Fig. 5). Each species benefits from the stability of the warning signal in the environment, as predators will know to avoid that general color pattern. On the other hand, Batesian mimicry is when a harmless species evolves similar warning signals to a toxic species, and thus are dishonest signalers [7]. Imagine that the predators in this hypothetical scenario now avoid all butterflies with orange spots. A selective advantage will therefore benefit harmless butterflies that, say, undergo a mutation that increases orange coloration because they would be less likely to be attacked. Thus, by exploiting learned (or innate) aversions in predators, the mimic has a greater chance of survival.

Figure 5. From left to right, the viceroy butterfly (Limenitis archippus) and the monarch butterfly (Danaus plexippus) were long thought to be Batesian mimics. Both species are distasteful to predators and thus are Müllerian mimics [8]. Photo credits: Rodney Campbell and Peter Miller, respectively (Flickr commons).

The evolution of aposematism seems like a bit of a paradox: wouldn’t any new trait that makes an individual more conspicuous get eliminated before predators can learn to avoid it? The answer lies with the foraging behavior of predators. Predators are often reluctant to try novel food items, a process called dietary conservatism, likely because the quality or safety is unknown [9]. Therefore, a prey species with a novel color pattern might be avoided outright because predators are unfamiliar with it. When faced with new prey, many predators can sample and reject prey items, often without killing them [10]. As we discussed earlier, some predators can learn and form associations with bright colors easily, and evidence even shows innate aversions [11]. These processes enable aposematism to evolve in the first place.

Now let’s think back to the previous scenario with butterfly color patterns: wouldn’t mimicry destabilize the entire process? If bright colors don’t always serve as a reliable signal of toxicity, predators would learn to ignore them. This answer lies with a process called negative frequency dependent selection, which means that as long as the mimic is less common than the unprofitable model species in which they resemble, predators are unlikely to figure out the identity of the mimic [12]. Often, a single negative encounter with distasteful prey is enough to create aversions in a naïve predator, so if the mimics are relatively uncommon, most of the predators in a population will have encountered and learned to avoid the distasteful prey. But what if the mimic gets too common? Predators would start to consume the colorful prey, driving the population of mimics back down. As the true unprofitable prey become more common, predators will learn to avoid it once again, thus equilibrating the process. This evolutionary predator-prey arms race might be complex, but it has produced some of the most beautiful animal color patterns observed in the natural world.

[4] Poulton EB. The colours of animals, their meaning and use, especially considered in the case of insects. New York: D. Appleton and Company; (1890).

[6] “Ituna and Thyridia; a remarkable case of mimicry in butterflies. (R. Meldola translation)”. Proclamations of the Entomological Society of London. (1879): 20–29.