Figure 1: An oil portrait of Mary Wollstonecraft Shelley by Richard Rothwell from the Encyclopædia Britannica https://www.britannica.com/biography/Mary-Wollstonecraft-Shelley/media/539744/15596 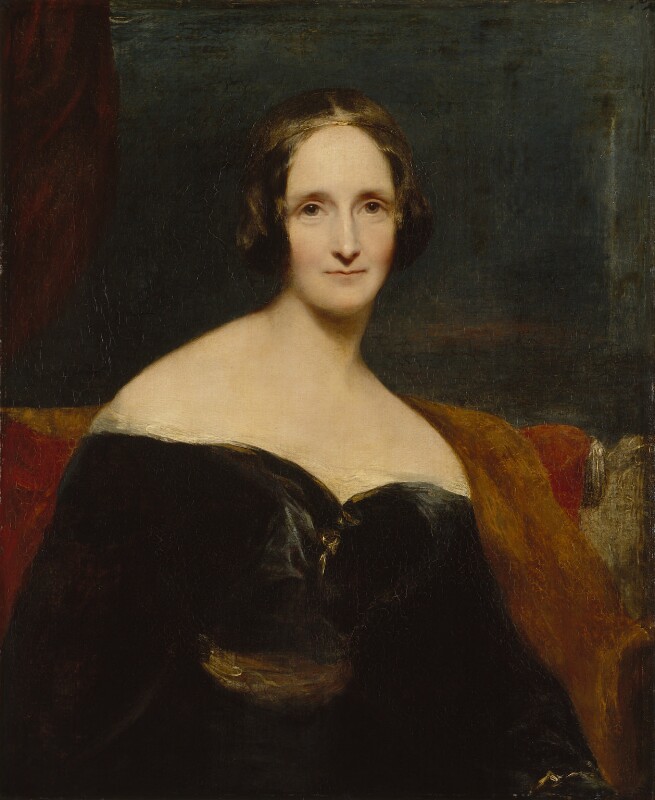 It was a dark and stormy night at the Villa Diodati along Lake Geneva,Switzerland in the summer of 1816. Amidst the howling winds and pouring rain, a few famously edgy Romantic writers and poets found themselves stuck indoors during a summer retreat. The crew included Lord Byron, a hedonistic bad-boy [1], Percy Bysse Shelley–a well-born aristocrat with copious unsettled debts, and Mary Wollstonecraft Shelley–the daughter of brilliant thinkers Mary Wollstonecaft and William Godwin. Legend has it that having perhaps gotten bored being cooped up inside, and of each other, Lord Byron, incited his party to a ghost-story competition. It was one one of these thunderous nights that Frankenstein, and the genre of science fiction, came to life through the pen of Mary Wollstonecraft Shelley. Frankenstein or The Modern Prometheus was published two years later in 1818 and celebrates its 200th anniversary this year.

While it often seems like a simple horror story in pop-culture retellings, Frankenstein brings light the dangers of uncontrolled scientific inquiry and overwork. With the 200th anniversary upon us, it’s a good excuse to pick up the novel and consider it in ethical discussions about the role of science in society and the importance of accessible science communication.

In the original novel, Victor Frankenstein, a young science student, becomes obsessed with the creation of life; he spends his time learning about anatomy in cemeteries, and eventually melds together various body parts and animates them to create a living being. Victor then neglects his creation and it causes mayhem and a few casualties. In the process of all of this, Victor becomes ill from overwork and alienates his friends and family.

Literary scholars believe that the novel is inspired by real science, Mary’s ethical questions about role of scientists in the creation of life, and her experiences of motherhood and family life. Mary, like Victor, spent a lot of time in cemeteries reading and exploring [2]. Scientists at the time, including Luigi Galvani, were exploring the role of electricity in the human body and had discovered they could use electric currents to re-animate frog legs and eventually the corpses of hanged criminals; the process was called ‘galvanism’[3]. This process called into light the role of the scientist in creating life and preventing death. Mary was also inspired by the progression of other biological and chemical advances, which you can learn more about in this super fun book by Rosanne Martillo [4]. Mary’s personal life and experiences losing a child also likely had a strong influence on the development of the novel and the influence of her role as a mother in her writing has been discussed widely among literary scholars [2].

A scientists, however, we can use Frankenstein as a unique framework for discussing scientific ethics and work-life balance among new scientists. The book provides a novel and creative way to explore these sometimes dry and difficult topics.

With regard to ethics, we can ask if Victor should have created the being he created and if there was any way he could have prevented the disaster that followed. In modern science, Victor’s experiment would have required review by an Institutional Review Board, or IRB. The IRB is an appointed council group of researchers and specialists at a university that reviews and either approves or disapproves all research involving human subjects. Proposed research is judged based on merit, need, and fair treatment of human subjects. Research that does not pass IRB approval cannot be conducted at the university. This type of review is also conducted for animal research by the Institutional Animal Care and Use Committee (IACUC). Overall, the goal of each board is to ensure that researchers do not mistreat or misuse resources and life in their pursuit of scientific inquiry. One way to engage new researchers in considering the ethical value of their work is to ask the question: How would Victor Frankenstein fare in an IRB review?

You may not believe it, but a few other people have already thought about this. In fact, one team published a paper evaluating Victor’s study along with an actual mockup IRB protocol [5]. Broadly, the authors point out that Victor failed to: (i) develop the experiment fully with his mentors, (ii) consider how the being he created would be treated once alive, (iii) obtain proper permits for using dead body parts, and (iv) consider the benefits and broader impacts of his work. The authors also point out that Victor may have given more thought to all of these topics if he had engaged more with his friends and family and maintained a more balanced life schedule.

Frankenstein is not only a warning to scientists to consider ethics, but also to be aware of their connection to society and the importance of remaining connected to produce valuable work. The story of the isolated genius obsessing over his work to make a name for himself in the ever competitive realm of exploration and human creation is not a unique one. Victor, in pursuit of creating life, works long hours, loses touch with his family, and eventually becomes very ill. All of this changes his ability to manage the implications of his work, which in this case happens to be a monster running around town with no understanding of societal norms to say the least. While for most scientists distraction from reality may have less dire implications for the general public, it is still important to remember to stay grounded and engage with culture. You never know what your Frankenstein will do when you’re done with it.

So as you engage in horror movies, costume parties, and spooky stories around the fire this Halloween, maybe also consider how you can ground your science and remain connected to the world. If nothing else, take take this post as a clear directive to work on fewer nights and weekends and definitely do not spend Halloween in the lab because you may end up with an uncontrollable green goon on your hands.