Humans have been occupying outer space for decades, but what other species have made it beyond Earth’s atmosphere?

The first human went into outer space on April 12, 1961. There has been at least one human in space almost continuously since 1989 (and continuously since 2000 on the International Space Station [ISS]). Humans aren’t the only Earth-dwelling species to have made it into space. In fact, an impressively diverse assortment of Earth’s organisms have experienced weightlessness in outer space.

Prior to the first ever human-occupied spaceflights, we had no real way of knowing if humans could survive a trip to space. Would we be able to swallow in microgravity? Would we be able to tolerate the radiation exposure without the protection of Earth’s atmosphere? Are the rocket ships used to transport humans to and from space able to maintain a safe environment during the entire course of the flight, including the brutal reentry into Earth’s atmosphere? Because of all of these unknowns, several species of animals were sent into space before humans during the years of the space race between the USSR and the USA (1947-1961).

Technically, the first living organisms in space were seeds and fungal spores in 1946. The first animals in space were fruit flies in 1947, and the first vertebrate was a rhesus monkey in 1949 [1]. The USA and USSR continued to send a variety of dogs, mice, monkeys, and chimps to space throughout the 50’s and 60’s as they developed their spaceflight technology. In 1957, a dog named Laika became the first living organism to orbit the Earth (Figure 1). 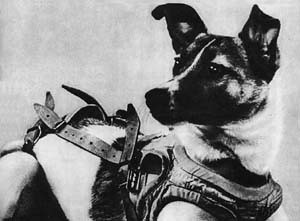 Even well after human spaceflight was readily achievable, we have continued to send a wide variety of organisms into space for experiments. These organisms have been used to increase our understanding of the effects of microgravity and radiation on biological systems so that we can continue to plan for longer human spaceflights. One crucial example of these experiments is the attempts to grow edible plants like wheat and lettuce from seeds while in space. Other examples include collaboration projects with K-12 students in the US conducting replica experiments of butterfly and spider development in space compared to their classrooms. These experiments test the fundamental biology of various organisms in space and also serve to get students excited about being involved in scientific experiments. 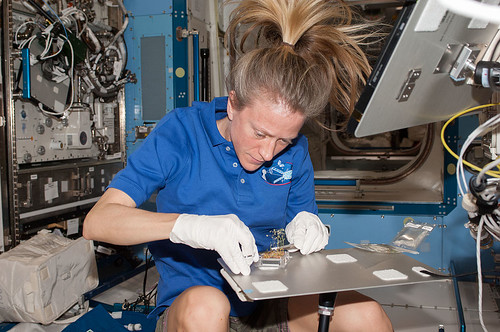 Here is an incomplete list of organisms that have been to space [1,2]:

Some of these organisms did not survive their missions. Here’s to the all the organisms that sacrificed their lives to better our understanding of biology in space.

[1] Beischer, DE and Fregly, AR. 1962. Animals and man in space. A chronology and annotated bibliography through the year 1960. Office of Naval Research, Department of US Navy.

« How Many Botanists Does it Take to ID an Orchid?
Archive
The Society for Neuroscience Annual Meeting »