Research Highlight - As a Ph.D. student, I get to grow brain cells!

As a Ph.D. student, I can sometimes get caught up in the nuances of my work and forget to take a step back to realize just how excited I am to be able to do the research that I do. Sharing my work with others is a great way to do that – so here’s a brief peek into an ongoing project of mine as a Ph.D. student in Dr. Courtney C. Babbitt’s laboratory at UMass Amherst. 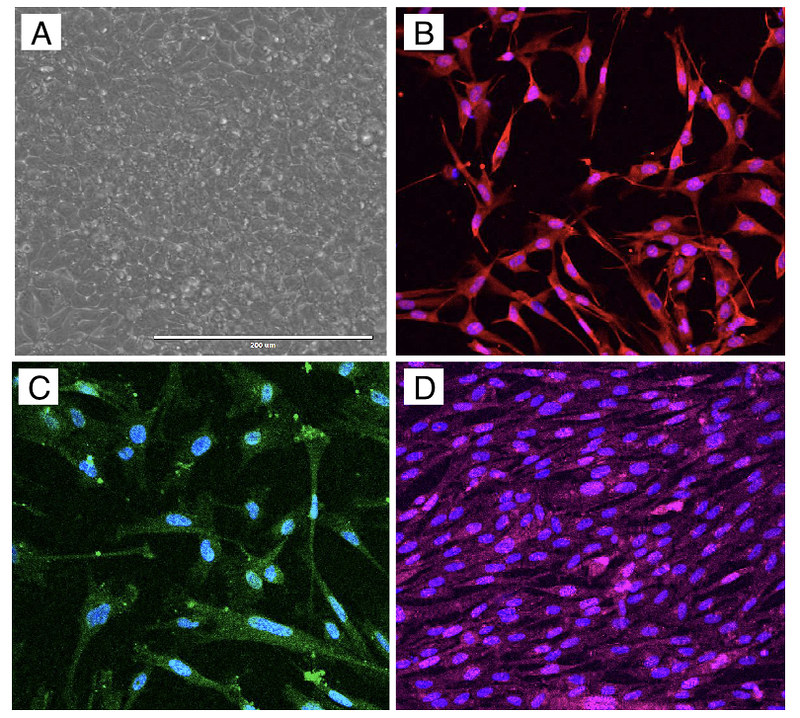 Fig. 1 The same human cell line throughout differentiation from stem cell (A) to neural progenitor cell (B), neuron (C) and astrocyte (D). The iPSCs in (A) were imaged using a light microscope while the neural cells in (B-D) were imaged on a fluorescent microscope (which is why they look different!). All images taken by Trisha M. Zintel in Courtney C. Babbitt’s lab at University of Massachusetts Amherst.

I made brain cells. Yes, I know, we ALL make brain cells at some point, but I did it on purpose! In a plastic dish! I started with “induced pluripotent stem cells” (iPSCs, Figure 1A), which are cells which were “committed” to being skin cells in an adult human, but were tricked backwards in developmental time so that they could become stem cells again. Briefly, stem cells divide extensively and have the potential to become ANY kind of cell in the body - skin cells, brain cells, heart muscle cells, etc. Scientists now know a lot about what molecules and cellular processes are necessary to control what kinds of cells stem cells become. Using this knowledge, I grew them in a specific liquid growth medium that contained molecules we known will induce their differentiation into into neural progenitor cells (NPCs, Figure1 B). NPCs are neural “precursor cells” that can’t turn into any cell type other than those that would be found in the brain, but that can become any neural cell type, of which there are MANY different kinds of neural cells in the adult brain, each kind serving a defined purpose. Finally, by taking different sets of these NPCs and growing them with distinct media, I was able to obtain cells commonly found in the adult brain - neurons (that transmit electrical impulses) (Figure1 C) and astrocytes (which support complex neuron “networks” required for brain function) (Figure1 D). Keep your eyes out for a more detailed post on how scientists developed these methods and their potential in biomedical and basic research!