If you’ve ever been to the zoo or watched a nature documentary featuring primates, perhaps you’ve noticed the wide array of colors and patterns present in primate hair. We have to work hard to attain eccentric hair colors and styles, but many primate species are born with them! In fact, primates have more variety in hair color than any other type of mammal, from the snowy coat of the silvery marmoset to the deep red shag of orangutans [1]. Often, even closely related primates can exhibit an amazing variety of color patterns, particularly around their face. Just take a look at these three species of guenon monkeys, a genus of old world monkeys that live throughout the African continent. 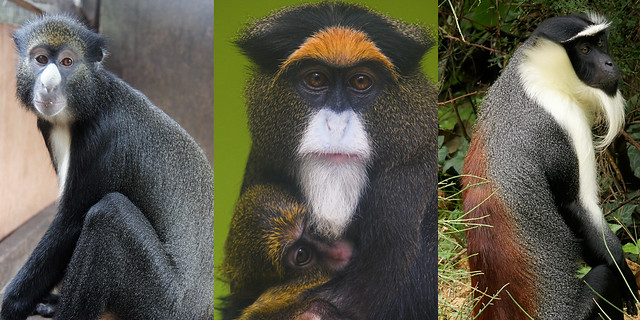 These monkeys are all in the same genus, and yet they have remarkably diverse, striking hair color patterns! So why is this happening? And what makes primate hair color so special?

Mammals tend to use their hair color for two main reasons: camouflage, and communication [2]. Let’s start by talking about the former. Hair coloration can be a useful tool for concealment, usually from potential predators but also from potential prey. One common form of camouflage is background matching or pattern blending, in which hair coloration and patterning closely resembles the dominant colors and light patterns of the animal’s environment (think white spots on fawns to mimic dappled sunlight) [2]. Primates are unique as mammals partially because of the variety of habitats and ecological niches—the role an organism has in exploiting the resources in its environment—they inhabit globally [3]. Primate hair has adapted right alongside their diverse range of habitats: species living in dense rainforests tend to have orange or darkly colored coats, while primates in open, bright habitats tend to have lighter-colored hair [4]. The effects of camouflage throughout a wide variety of environments—from bright, open savannahs to dark, humid rainforests—partially accounts for the particular variability of hair colors in primates, but it certainly isn’t the whole story [3]. It turns out that the complex social structures found in many primate species also help drive diversity in hair coloration.

Figure 2. Background matching hair coloration in Chacma baboons (left) and Golden Lion Tamarins (right). Though the Golden Lion Tamarin’s vibrant orange coloration may look extremely obvious to us trichromats against a green background, most of the mammalian predators these tamarins encounter are dichromats (red-green colorblind) [2]. To them and to most of the tamarins themselves, their orange coloration blends in perfectly with the bright green leaves of trees! (Photo credit D. Gordon E. Robertson and stevehdc, respectively)

The bright white beard and yellow forehead of the De Brazza’s monkey (middle, Figure 1) is certainly not helping it blend into the greenery of the forest, so it seems likely that some hair coloration is used for visual signaling to other individuals. In the case of guenons, hair coloration patterns are unique to each species and may help individuals distinguish their own species from other guenon species living in the same area [5,6]. Guenon species in particular often have overlapping ranges and compete with each other for resources, so the ability for a guenon to distinguish its species from others can help it avoid hybridization (aka mating with the wrong species!) [5]!

The exceptionally wide range of habitats (deserts, rainforests, snowy mountains, swamps, and cities, to name a few) and social structures (such as solitary, pair-living, massive troops, and seasonally-shifting groups) present in primates certainly contributes to their variety of colors and patterns, but there are still many unanswered questions in the world of primate hair color. We know that many primate species use brightly colored skin patches in sexual signaling (see Figure 3), but aren’t really sure if hair has a similar function [2].

For example, while there is direct evidence that the vibrancy of red facial skin in male mandrills is directly related to body condition and is maintained through sexual selection, our understanding of sexually dichromatic hair—or clear hair color differences between males and females of the same species—is far more limited [2]. In many primate species with sexually dichromatic hair, males are actually the darker-colored, less conspicuous sex [2]. A recent study looking at hybridizing populations of two howler monkey species with different patterns of sexual dichromatism found that different male coat colorations did not deter females from mating with males of the other species, suggesting that, at least in this species, male coloration is not important to females when choosing a mate [7].

There is still much to be understood about the adaptive forces behind colorful primate pelages. We have yet to figure out exactly how primates use their hair color in social and sexual signaling, and research on how environmental factors influence primate hair color is ongoing [2]. As a graduate student at UMass Amherst’s Comparative Primatology Laboratory, one project I’m working on is how hair color throughout different body regions has evolved across the primate order. Though we have a lot to learn, new and exciting research on this topic will continue to color in our knowledge of primate hair!

« Celebrity Sightings while Science-ing
Archive
Is it possible to eat too much fish? »