How do the microorganisms that live in hot springs, deep sea floors, and volcanos survive?

When you think about a microbe, the first thing you picture is probably your run-of-the-mill yeast or the bacteria that lives in your gut. But microbes live in every place on earth, from the pits of volcanoes to the middle of glaciers. Microbes that live in extremely hot temperature environments from 80 - 100°C (176 - 212°F) are called hyperthermophiles, or “super heat loving” organisms. These type of organisms, mainly archaea and bacteria, were some of the first living things on earth 3.9  billion years ago [1]. We might even find a hyperthermophile-like organism on another planet where only the toughest of life can survive.

Every living thing that we know of needs water to survive, so wherever in the world hyperthermophiles dwell, liquid is a must. However, because of low solubility of oxygen at high temperatures, the vast majority of habitats for the microbes are anaerobic, meaning without oxygen [2]. These are the main features that connect hyperthermophiles together and they have been found in environments all over the world. As long as there’s super hot water you could find a hyperthermophile! 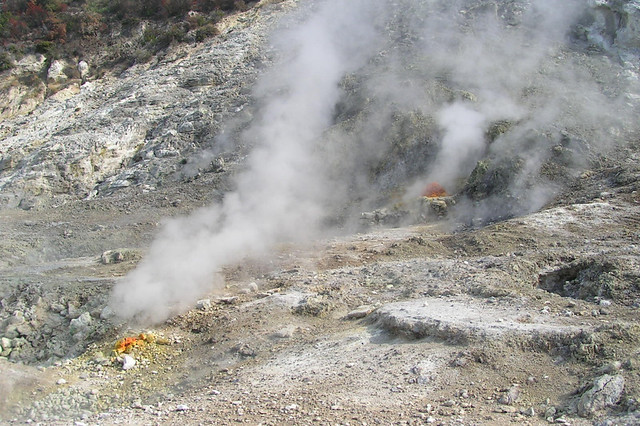 On land, high temperature sulfur fields (Solfartic fields) are made of mud and soil where magma chambers a couple kilometers below the earth spew out volcanic hot gas [2]. These boiling mud fields are usually close to volcanoes and the surrounding waters are around 100°C (212°F). Hyperthermophiles have been found in a many different hot springs, from the ones found in Yellowstone National Park, to volcanic rift zones in Iceland. They are even present in Japanese *onsens *used for bathing and restoration [1]. 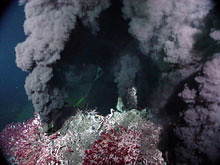 Under the sea, these microbes can be found from the caps of the waves to the bottom of the ocean, as long as there is a hydrothermal vent around. In these areas, often near volcanos or tectonic plate lines, hot fluid is released up into the ocean [3]. The most intense vents, called “black smokers”, emit hot gases up to 400°C (752°F) from the sea floor into the freezing ocean; since these streams happen in bursts, and not all the time, hyperthermophiles must be able to survive both the intense heat and the 2.8°C (37°F) water when the vents are not spewing [3]! They must also adapt to the high pressure and lack of oxygen.

But how can any living thing survive in such high temperatures where DNA, RNA, and proteins, all necessary for life, are easily unraveled? The answer is with many different coping mechanisms! In fact, the heat even offers some advantages to the microbes: higher rates of reactions, more membrane fluidity, and better solubility of necessary chemicals [4]. 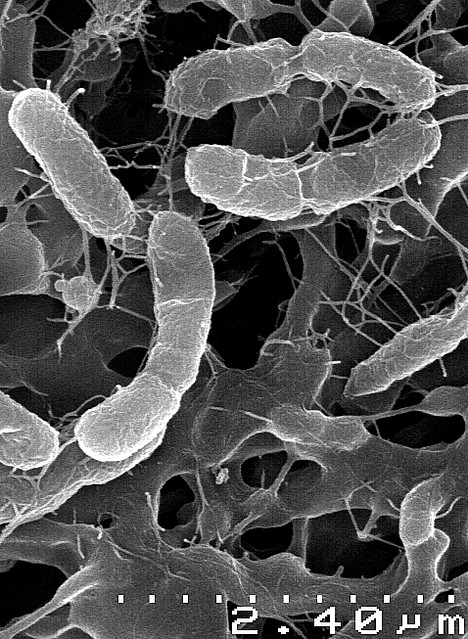 Hyperthermophiles have specialized rigid enzymes that do not unfold in the heat, unlike in most organisms, and actually work best at high temperatures [4]. They also have slightly different cell membranes with some key features that promote stability. Hyperthermophiles generally have longer hydrocarbon chains in their membranes which keep them from becoming fluid and unstable in higher temperatures– a strong membrane is vital to keep the cell alive [5]! Heat Shock proteins, which are actually in all organisms, are particularly important in hyperthermophiles. They refold proteins that were unfolded by the heat and make them function again, sort them into the correct area of the cell, and generally protect cells in high heat. Hyperthermophiles have an abundance of these specifically suited for extreme temperatures [5].

It is amazing that extreme conditions can support life on Earth, and scientists are still researching all the small ways that these organisms protect themselves against their extreme habitats. If we are able to better understand and recreate these survival techniques, maybe we can engineer an organism that can live on other planets, or at least understand how an alien organism can live successfully on their hardly habitable planet! Astrobiologists have hypothesized that planets with water, carbon, and necessary metabolites could host alien life, and have pinpointed several exoplanets out of our solar system where this is possible. With hugely varying pH, temperatures, and pressures, those organisms would look like some of the extremophiles here on Earth.

Hyperthermophiles’ unique physiology also has potential for use in biotechnology. Archaea that produce ethane have been great candidates for producing biofuel en mass. With their ability to withstand the heat and acidity of biofuel production environments, these microbes could produce ethanol quickly and easily [6]. The seemingly small adaptations of these organisms have so many potential uses from medicine, to fuel, to exploration of alien organisms– hyperthermophiles are indeed the hottest microbe on the market!

« Life, the universe, and everything: Dreams of being a biophysicist
Archive
The Price of Pigment on Your Immune System »