In some species, the phrase “I could eat you up” between lovers has a very literal meaning. Let’s check out the stories behind sexual cannibalism, the strange and intriguing behavior where males become meals!

Don’t you hate when you’re trying to make babies but you’re also starving? Well, arachnids, insects, and amphipods have solved this issue – you can make babies and eat your sexual partner at the same time! That’s right, sexual cannibalism is a thing!

Sexual cannibalism is when a female animal eats a male of the same species before, during, or after copulation [1]. It’s a behavior that has caused controversy among evolutionary biologists for decades. Current evolutionary theory says that natural selection acts on animals to keep traits that increase reproductive success within a population. In other words, if a trait hurts your chances to make more babies, you probably won’t make many babies and, as a result, that trait will gradually leave the gene pool.

At first look, it doesn’t seem like sexual cannibalism helps much with reproductive success. After all, getting eaten means that you will not have any future chances to make children. Even so, sexual cannibalism must have provided some reproductive advantage in order for us to see it so commonly in arachnids, insects, and amphipods.

Let’s look at some of the fascinating studies in spiders that explore how sexual cannibalism came to be! 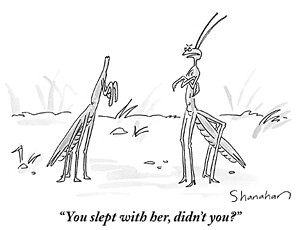 Fig 1. The aftermath of sexual cannibalism. Cartoon by Danny Shanahan.

1. Australian redback spider – When males are complicit in their own death

The males of most spider species attempt to avoid being eaten by carefully approaching females and running away when copulation is over (typical commitment-phobe…), indicating they have evolved to be more cautious to survive to reproduce again [1]. However, Australian redback spiders present an extreme case of self-sacrifice, where the male spiders position themselves above the female’s jaws during copulation [2]. This act, called male complicity, seems to contradict the goal of increasing reproductive success (see Bruno Mars’ Grenade). What in the world would drive these male spiders to let themselves be eaten?

Scientists found that male complicity in Australian redback spiders led to two paternal advantages [2]. On average, complicit males had longer copulation sessions and as a result fertilized more eggs. While female Australian redback spiders typically mate with multiple males, females that ate males were more likely to reject additional mates, suggesting that the eaten male would have less competition in fertilizing the female’s eggs. Together, these benefits may have driven male complicity to become an adaptive behavior in Australian redback spiders. Interestingly, a follow-up study showed that if a female was well-fed, she was less likely to consume her partner [3]. This suggests that in poor environmental conditions, sexual cannibalism becomes more useful for increasing male and female reproductive success.

2. Nursery Web spider – When males bring gifts in the hopes of staying alive

In the Nursery Web spider, males are not so willing to sacrifice themselves. Instead, males bring the spider version of flowers and chocolate: a lovely hand-wrapped insect gift [4]. If the female moves to attack the male instead of accepting the gift, the male may play dead, entering a state called thanatosis. Despite “dying,” males manage to keep the gift poised between themselves and the female. As soon as the female begins to eat the gift, the male springs to life, initiating copulation. Researchers found that males engaging in thanatosis had more successful copulations with females. This implies thanatosis is an adaptive strategy to increase the chance that a male survives to mate again.

It makes sense for a female that consuming her sexual partner would increase her reproductive success. The extra nutrition can increase the number and quality of her eggs or improve the chances they will be fertilized [1]. Interestingly, not all females of a given species are cannibalistic. To determine the potential benefits of sexual cannibalism, researchers allowed female Humped Golden Orb-weaving spider to kill but intervened before they could eat their mates, preventing the females from gaining the nutritional benefits of eating their partners [5].

When comparing females that killed their mates to those that did not, they found that “killer” females were predisposed to earlier maturation, faster growth, and produced larger first egg clutches, even though they did not consume the mates they killed. However, “killer” females females matured at a smaller size and in poorer condition than their less violent counterparts, potentially meaning that for small “killers” eating a male would have a higher relative nutritional benefit than it would for a larger female. The researchers suggested that sexual cannibalism in this species occurs more often in females that require more meals to compensate for their poor condition and improve their reproductive output.

While sexual cannibalism is a fascinating subject, there is no simple answer as to why it evolved in these taxa. Every studied species seems to have different story to tell, making it difficult to understand this bizarre phenomenon. All I can say is, I don’t envy the males of these species who walk a fine line between parenthood and death!