While many scientists handle their study organisms daily, wildfires can remain elusive.

Last summer I went on vacation to Grand Canyon National Park, and was looking forward to exploring some new and exciting terrain. I had been planning the trip for months, but a few weeks before I left, I found out that much of the area I had planned to explore would be closed because of a wildfire (Figure 1). I was thrilled. 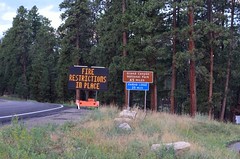 I study wildfire. Specifically, I am interested in how people impact when and where wildfires occur. As a graduate student, I often present my research about wildfires at conferences and to my peers. After almost 4 years in graduate school, I have also seen countless research presentations. While the actual science (data, results, etc) is the most important parts of these presentations, I will concede that compelling photographs and videos help keep my attention. And visuals are useful. After all, a picture is worth a thousand words, right?

I had grown tired of using publically available internet stock photos of wildfires in my own presentations and wanted some of my own. Since my data typically comes from satellite images or agency records, instead of field work, I don’t have many opportunities to photograph wildfires. But with the Grand Canyon alight, I thought I might actually be able to snap a few photos of my own.

Wildfire can be dangerous, and this particular fire in the Grand Canyon, called the Fuller Fire, eventually burned close to 15,000 acres. This is about 23 miles2, or about the size of Manhattan! Plus with these incidents, there are typically tons of fire crews, equipment, and access closures, which are necessary to safely manage the wildfire. That said, I was pleased to get a couple of photos from a safe, and respectful distance (Figures 2 & 3). 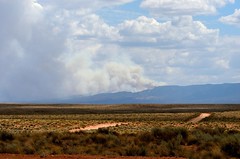 Fig. 2 Smoke billows from the Fuller Fire as it burns on the Kaibab Plateau at Grand Canyon National Park. Image Credit: Emily Fusco 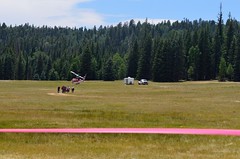 Fig. 3 Wildfire response workers are walking from a helicopter on the Kaibab Plateau at Grand Canyon National Park. I remained respectfully behind the pink tape used to keep tourists (like me) from interfering in their work. Image Credit: Emily Fusco

Now I have become extra aware of potential wildfire related photos I can take during my travels. A few of my other favorites are a small wildfire in New Mexico I saw while on the way to a wedding (Figure 4), a photo of burned areas from the Party Rock fire I took while back home in North Carolina (Figure 5), and a photo of an area that burned in 2006 in Arizona (Figure 6). While striking photos of wildfires will likely remain out of my reach (which I am mostly thankful for; Figure 7), I am pretty happy with the photos I have of my study organism so far. 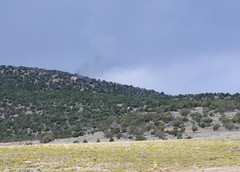 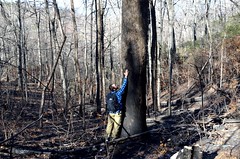 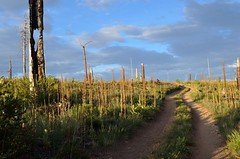 Fig. 6 Though much of this area has begun to recover, a charred tree reminds visitors of a wildfire in 2006. Image Credit: Emily Fusco