Ever yell into a canyon and hear your voice echo back? Learn how bats use this property of sound to navigate at night!

Most bats are nocturnal, meaning they’re active at night and sleep during the day – opposite to our typical human lifestyle (Fig. 1). This nocturnal schedule is thought to be a strategy bats have evolved to take advantage of the many delicious insects (their prey) flying around at night. However, in order to reap the food rewards and deem this nocturnal lifestyle adaptive, bats must be able to efficiently and effectively hunt and catch these tiny, fast-moving insects. Foraging at nighttime is challenging, because it’s dark – this makes it both hard to see prey and easy to accidentally fly into a tree. So how do bats navigate, orient, and hunt in the dark? Nature has come up with a solution, and it’s a fascinating system that we’ll explore here.

Figure 1. The a) Townsend’s big-eared bat (Corynorhinus townsendii) and b) White-winged vampire bat (*Diaemus youngi) *show off their highly adapted ears used to detect sounds relevant for communication, hunting, and navigation in the dark. (Photographs modified from Wikimedia Commons: (a) & (b).)

Echolocation is a process in which bats produce sounds and then listen for the echoes of those sounds to return to them after bouncing off of objects (Fig. 2). Both the production of these sounds (emitted vocalizations) and the reception of these sounds (reflected echoes) are highly specialized so that bats can receive precise information about their surrounding environment based on the timing and intensity of these echoes. Essentially, bats are able to create an ‘acoustic map’ of the objects around them, using sound to understand where a tree branch, cave entrance, water source, or tasty insect might be located. They can accomplish this with similar acuity to what we humans achieve through sight, and this ‘acoustic map’ can then inform their behavior and movement decisions [1]. 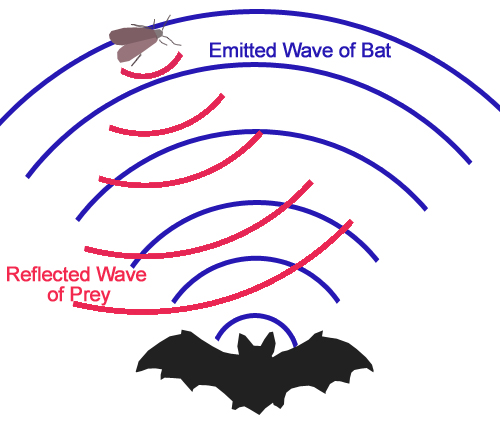 Figure 2. This schematic shows how sound waves emitted from a bat’s echolocation call can move through the air, bounce off of a prey item, and reflect back such that they can be detected by the bat. (Diagram via Wikimedia Commons.)

It’s difficult for us to imagine how this might work, because we don’t inherently use our own vocal and auditory abilities to echolocate (although as humans, we do have the capacity to train ourselves to do this to some degree – an ability particularly utilized and developed by some members of the blind community). But in a very rough way, we can understand the phenomenon by thinking about how our voices sound in, say, a tiny closet versus a large auditorium. In a tiny closet, the space is considered ‘dead’, with no reverberation. In a large auditorium, the space is considered ‘live’, with high reverberation. These distinct resonance qualities result from the different ways the sound waves from our voices reflect off of the room surfaces; both the size of the room (i.e. distance the sound waves travel before hitting a wall and bouncing back) and the structural materials (i.e. whether the sound waves are absorbed or reflected) affect the echoes. Imagine you were blindfolded and had to listen to your own echo to determine your whereabouts and identify the structures (or lack thereof) around you – in this scenario, you’d be echolocating!

Most bats can do this with far better spatial resolution than we can, as it is their primary means of finding food and avoiding dangerous collisions. Because these objectives are fundamental to survival, behaviors (i.e. vocalizing) and morphological structures (i.e. ears) related to echolocation are subject to strong natural selection. For instance, bats with ears that enable awesome hearing will likely catch more insects, live longer, and pass on genes for awesome-hearing-enabling-ears to more offspring than those bats with not-so-helpful ears. Over time, bat populations should therefore evolve better and better hearing via better and better ear structures. This is an example of evolution through natural selection, and it helps explain why we see special adaptations for echolocation in modern bats. Many bat species today have large, mobile external ears that can move dynamically to enhance the detection of echoes in particular directions, allowing for precise localization of prey – in other words, awesome hearing (Fig. 1) [2].

Echolocating bats use a range of specific sounds, or calls, adapted to specific circumstances. Some call types are best for scanning to locate prey while others are better for tracking and closing in on a known prey item. The utility of a certain call type is determined by the acoustic properties of different sound structures under different environmental conditions. Bats can even manipulate the pattern, tempo, and frequency of their calls during flight so that they can best capture relevant environmental features in real time – whether targeting tiny, moving prey items or searching for a large cave entrance. For example. as bats close in on prey targets, they speed up their vocalizing rate so that they are calling really fast, getting quick feedback to accurately pinpoint and capture the moving insect [3].

Echolocation requires very specific sound production and perception capabilities, as well as the brain capacity to quickly process and integrate auditory information so as to inform suitable behavioral responses. This adaptive ability of bats to accurately interpret their environmental surroundings using sound is a truly fascinating biological phenomenon – and it even inspires applications for human industrial use. In fact, this natural echolocation system is so efficient and effective that some advances in our military and industrial sonar technology come out of our scientific discoveries around how bats echolocate and navigate with such precision and acuity [4]. Recent investigations into how dense groups of bats avoid crashing into each other are inspiring the development of crash avoidance technology for drones and other unmanned aerial systems [4]. Sometimes, nature knows best!

« Fins, Limbs, Rays, and Digits – A Beginner’s Guide to Terrestrial Living
Archive
How to Expand Your Senses by Reading a Blog Post »