Life’s transition out of the oceans changed some of the body’s most important structures. Recent research sheds light on this drastic shift.

Late in the Devonian period of life, approximately 400 million years ago, fish-like vertebrates first crawled out of the water and onto solid ground. This event marked one of the major transitions in the history of life, and all terrestrial life-forms are descended from those ancient adventurous animals. This transition involved many changes to our ancestors’ skeletons and muscles that allowed them to move, eat, and breathe on dry land. One such adaptation was the evolution of limbs from some of the bones that underlay the fins in our more fish-like ancestors. Specifically, it’s thought that the limbs of four-legged animals, or tetrapods, evolved from the expansion of the distal radials, a set of bones that help connect the fin to the trunk of the body. The distal radials (and every bone in our limbs) are all endochondral bones, which means that they are built by mineralizing cartilage with calcium.

Rather than our dexterous, jointed digits, fish have structures called fin rays: long, tube-like bones that project out from the distal radials, providing structural support for the fin. Most modern bony fishes, like zebrafish, have fin rays (Fig 1; shown in gray). Despite appearing superficially similar to your fingers, these structures are not thought to be directly related to our own digits, as fin rays are dermal bones, which differ from endochondral bones both structurally and developmentally. Because we have no dermal bones in our limbs, our ancestors must have lost these fin rays, sometime during the evolution of limbs. But a recent study in Nature by Nakamura and colleagues (2016) demonstrated that a suite of genes responsible for the development of digits in mammals is also involved in the development of fin rays in modern fishes, suggesting that these two structures are in fact related at a molecular level and highlighting the importance of these genes in the fin-to-limb transition. 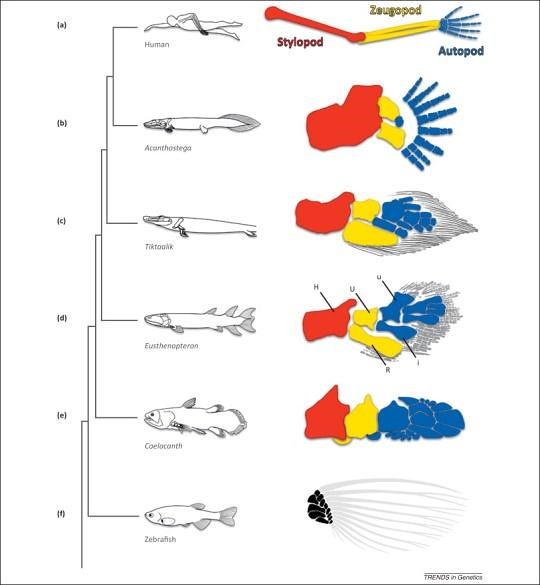 Figure 1 The evolution of a transition, mapped onto a phylogenetic tree that includes modern fish and humans as well as several intermediate fossil forms. The distal radials of the modern zebrafish (bottom) are colored black while the fin rays are grey. (Source: Schneider & Shubin 2013)

Developmental biologists have long understood that a group of genes called Hox genes are critically important to the process of building an animal as that animal develops from a single-celled zygote into a multicellular adult form. In particular, HoxA and HoxD genes pattern the development of limbs in mice and other tetrapods. Mice engineered to lack specific HoxA and HoxD genes lost their wrists and digits. Nakamura and colleagues (2016) therefore wanted to investigate the role of these genes in fish fin formation. First, these authors determined where the cells that expressed these genes ended up in the adult zebrafish, and found that those cells primarily became part of the fin rays. 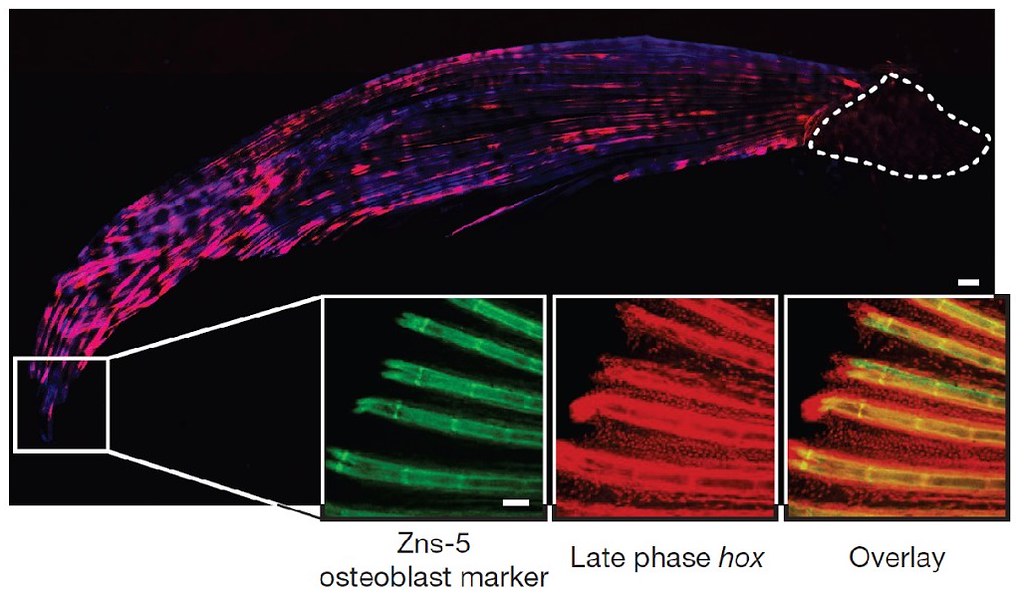 Cells that expressed those Hox genes are colored red in Figure 2. The top image shows the entire fin, with the fin rays projecting out from the white outline, which circles the distal radials. The smaller insets show the fin rays in green and Hox-expressing cells in red. Together, these data provide striking evidence that these Hox genes are expressed in cells that become the fin rays. This molecular similarity is surprising given the different developmental origins of fin rays and tetrapod digits. However, these data don’t speak to the functional importance of those genes; that is, the authors still didn’t know exactly what Hox genes were doing during fin development.

The researchers next engineered fish that were unable to express those Hox genes in order to assess their function during fin development. Developmental biologists often perform experiments like this, called knock-out experiments, in order to learn about the function of a gene by seeing what happens to an organism when it cannot be activated during development. Fish which couldn’t express HoxA and HoxD lost their fin rays when compared to their non-mutated siblings. Additionally, the knockout fish actually had more of the distal radials (see the bones colored red in the right-hand panels of Figure 3). Having m ore of those distal radials closely resembles the ancestral transitional forms of fins represented by (living) coelocanths and fossil forms such as Tiktaalik. 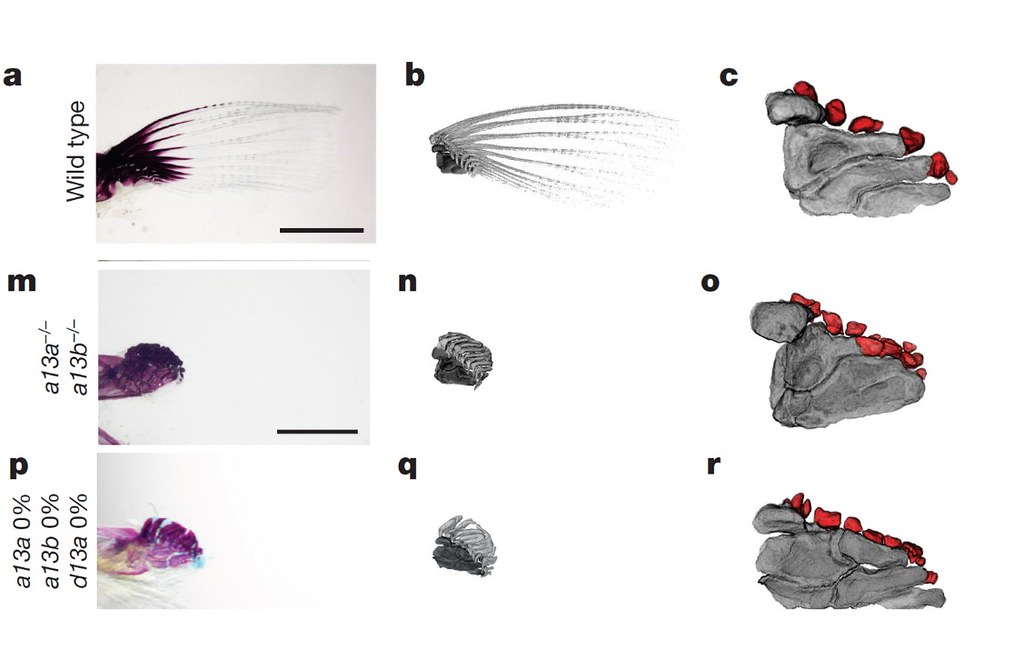 Clearly, digits and fin rays are more closely related than previously thought, despite being completely different types of bone. The transition from fin to limb involved both a loss of dermal fin rays and a gain of distal radials – this study showed that tweaking just a few genes could actually produce both of those results. While the evidence laid out here provides key insights into this major transition in the history of life, there is plenty more to learn about the precise molecular mechanism involved in this transition (i.e. what changes occurred to the DNA sequence of HoxA and HoxD genes that enabled this loss of function) as well as whether the genes that finely tune limb structures (i.e. those that account for differences in limb shape across different species of tetrapods) are similar to those that shape fish fins.