During the Anthropocene, conserving environmental flows for strategic ecosystems is not just about biophysical dynamics; water trade is becoming an undeniable influence

Life on earth is tightly linked to the availability of water and its uneven distribution throughout the planet is responsible for the occurrence of diverse ecosystems and life forms. However, the production and trade of goods, along with our consumption habits, are influencing regional hydrological dynamics.

Every time we buy flowers that have been shipped from other countries we are actually consuming the water that was necessary to grow those flowers somewhere else in the world. If you are a wine enthusiast it might surprise you how much water it is needed to grow the grapes for your wine. A single bottle of wine requires 173 gallons of water for its production; just imagine how much water is virtually contained in a liquor store.

Through the trade of food and other goods the international market is creating artificial paths of water flow. These are driving forces that reshape the natural water cycle. During the last three decades two concepts have been amply used to explain this phenomenon. Water footprint is the first of them and it refers to the total amount of water used to produce an asset. Figure 1 shows the water footprint of different products. 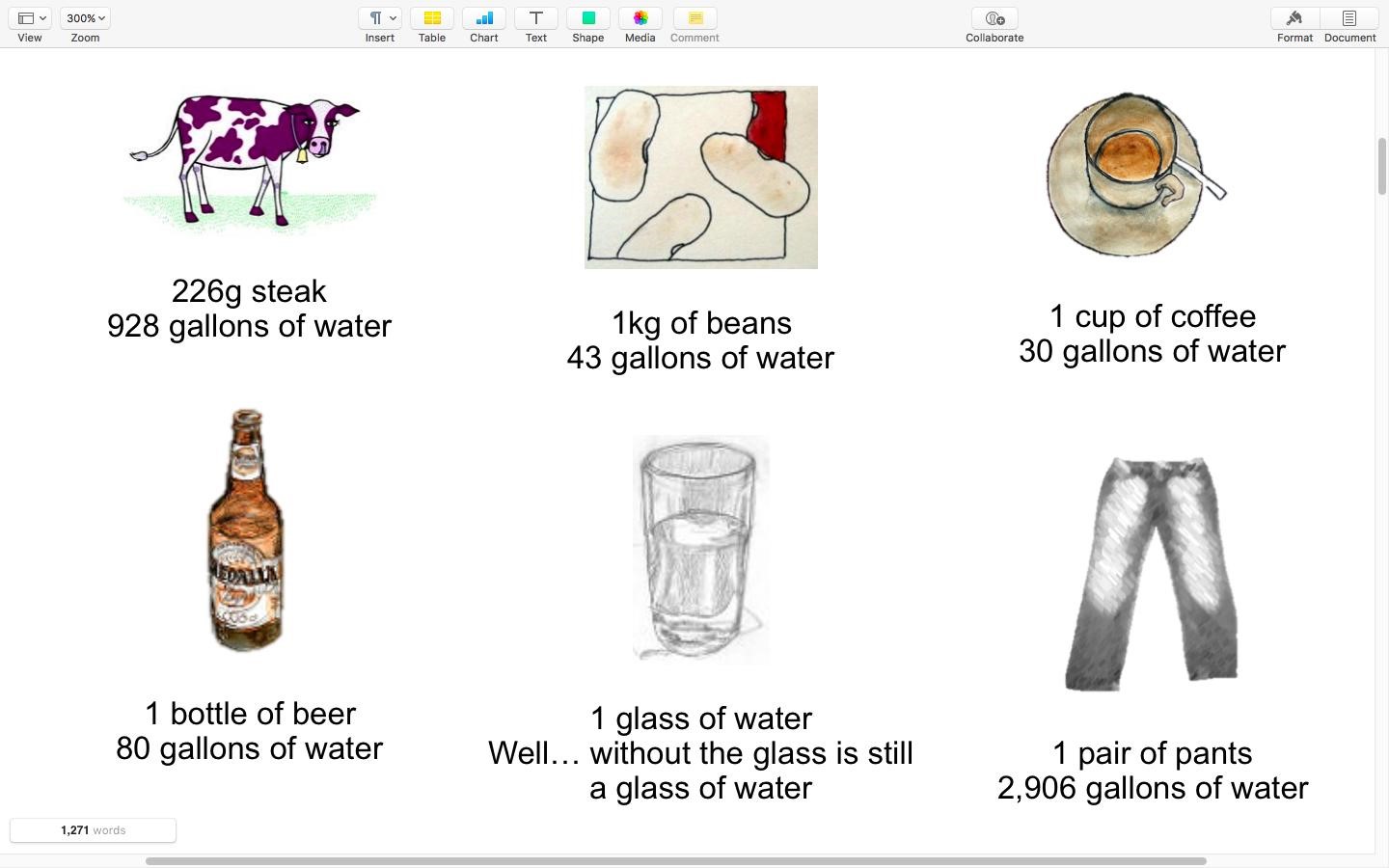 Fig. 1 Water footprint of different commodities obtained through an online calculator. Notice all the water you could save by drinking just water in your meals; even beer consumes less water than wine.

Three types of water are considered when assessing a water footprint: there is blue water which refers to streams and groundwater, green water which is the rain water, and grey water or the amount of water needed to dilute pollutants.

For example, in United States, the water footprint for beef has been estimated to be between 842 and 1,213 gallons per 0.5lb, depending on the farming system (grazing, mixed, or industrialized) [1]. Roughly 91% comes from green water attributable to the grain cultivated and delivered to feed the cows, 3.7% is blue water from water consumption of the cattle, and 5.3% from leaching and runoff of nitrogen-fertilizers.

Fig. 2 Proportion of the three types of water used for each commodity. Values from the water footprint interactive tool.

The second concept used to explain international market influence on water cycle is called virtual water. In order to better understand what virtual water means I will show you the example of the nation A in figure 3 that grows wheat and tomato. Whereas all the tomato that is grown in this nation is consumed internally, its wheat is used to produce and export bread to nation B. Nation A imports grapes and clothes from nation C. Clothes are consumed internally but grapes are transformed into wine and then sold to nation B. 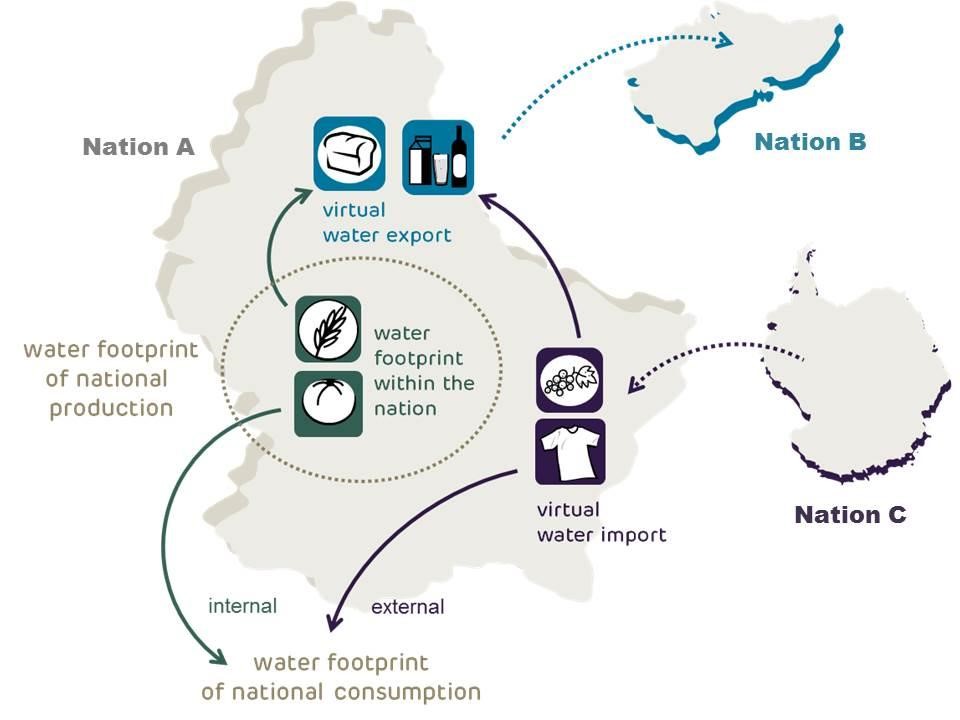 Virtual water allows accounting for the water balance between the places that export and the ones that receive. Occasionally, the balance is positive as the place that receives the product is gaining the virtual water embedded in the product. Consequently, the saved water can be used for sustaining local dynamics. However, this scenario is negative for the exporting nation (nation C) since the water resources that could be used locally are invested in growing grapes that will be exported. As a result, there is a loss of water. If the ecoregion in nation C is too dry, this can represent a huge threat to the stability of local ecosystems.

California is one of the driest regions of the United States. Its average annual precipitation is 18.51in; this is very low when compared to the country average of 40.78in. Yet California’s freshwater withdrawals (34.9E6 acre-feet per year) account for 11% of the national values. These withdrawals are mainly used for irrigating crops and producing food products that will be consumed outside of the state. Whereas California’s green water is very low, blue water usage is very high, causing stress on aquatic and terrestrial ecosystems that threatens their ecological health. An example of the opposite situation is found in Mexico which is a country that through yearly agricultural imports saves 17.5E6 acre-feet of blue water per year [2]. 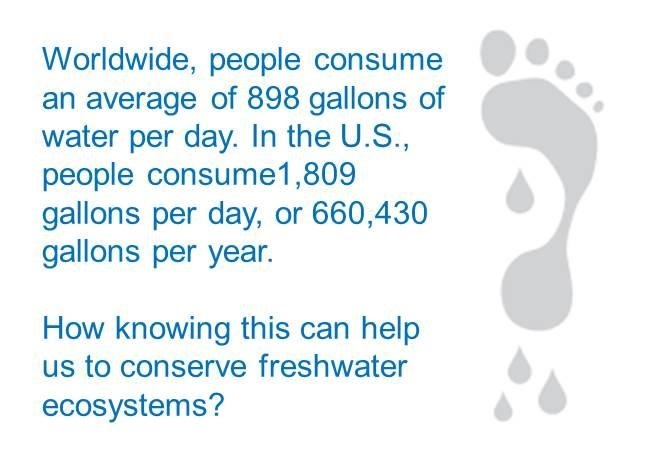 Fig. 4 Changing our consumption habits is the first step towards the conservation of freshwater ecosystems.

Virtual water and water footprint can be used as an indicator for efficient water management and is currently used in cities such as Philadelphia through the green city initiative. The Colorado Water Institute has been working on these concepts for the protection of the Colorado River [3].

Fig. 5 Facts like these are used by the Colorado Water Institute to educate the general public in adopting better consumption practices. Image modified from Christian Guthler design flickr.

Using virtual water and water footprint will help to reveal the net interactions of water between regions, negative balances that cause extreme exhaustion of resources and better pathways to safe water through positive balances. Also, acknowledging polluting load through the grey water estimates will help focus conservation efforts.

However, certain organizations such as the International Water Management Institute (IWMI) alert about the misuse of water footprint and virtual water as a sustainable water management tool. According to IWMI, water policies must encompass more elements and implications than just the ones addressed through water footprint and virtual water. After all, several social benefits are derived from the use of water, even in water-short countries.

Despite this, water footprint and virtual water concepts are useful ways for measuring the impacts of different activities on the ecosystems. Calculating the amount of water that a region will save through better commercial agreements is starting to be taken into account by decision makers when planning for the protection of sensitive ecosystems. In the meantime, we should consider changing our habits. You can start by calculating your water footprint, take a look at the water footprint calculator here.