Already broken your New Year's resolution? Can you blame it on your microbes? 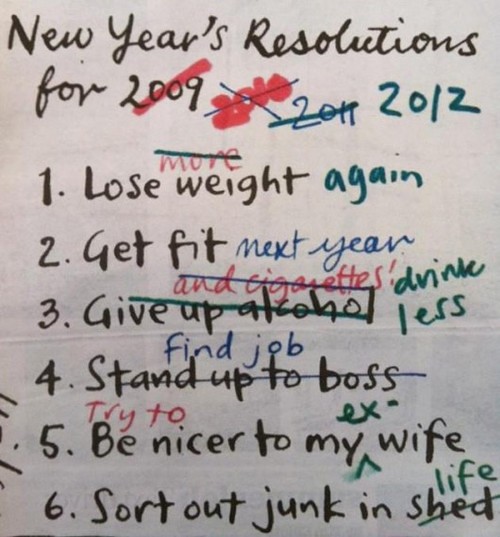 Fig. 1. Each year, millions of people go through the same routine of sustaining poor eating habits throughout the holiday season, resolving to do better in the New Year. But why is following through on these promises so hard? Image: Katie McDermott

Neuroscientists have been studying the neural pathways which lead to overeating and food cravings for several years [1]. But it is becoming increasingly clear that microbiologists may have a role to play in uncovering the basis of our bad eating habits. In one way or another, everything from autism to diabetes has been linked to the suite of microbes living in our gut (microbiome). So it was only a matter of time until scientists looked at how the billions of little beings in your guts may be messing with your best intentions to eat right [2].

Although scientists don’t know all the fine details of how hunger works, it is thought that appetite is the result of the hormones insulin, ghrelin and leptin sending different messages to your brain in response to nutritional state (Figure 2). Piecing together all these signals is the hypothalamus, an almond-sized area of your brain responsible for also regulating body temperature, thirst, reproductive and maternal behaviors, and sleep. All you know is you just took another bite of that tasty lasagna, but a simplified version of what is happening inside you is as follows: when your stomach is empty it produces ghrelin, which travels to the brain and binds receptors on the AGRP “hunger-promoting” neurons of the hypothalamus. When these neurons are highly active, you eat, and you eat a lot. But you have to stop. Eventually, your body will not agree that keep eating is the right thing to do. You satiate. Counteracting the ghrelin effect are insulin – which is produced by the pancreas in response to high levels of blood sugar - and leptin - which is produced by fat cells. Insulin and leptin bind both receptors on POMC “hunger-inhibiting” neurons, and inhibit the activity of AGRP “hunger-promoting” neurons. You can think of this circuit as the gas and the brake pedal of the roaring glucose-fueled machine you drive yourself in. 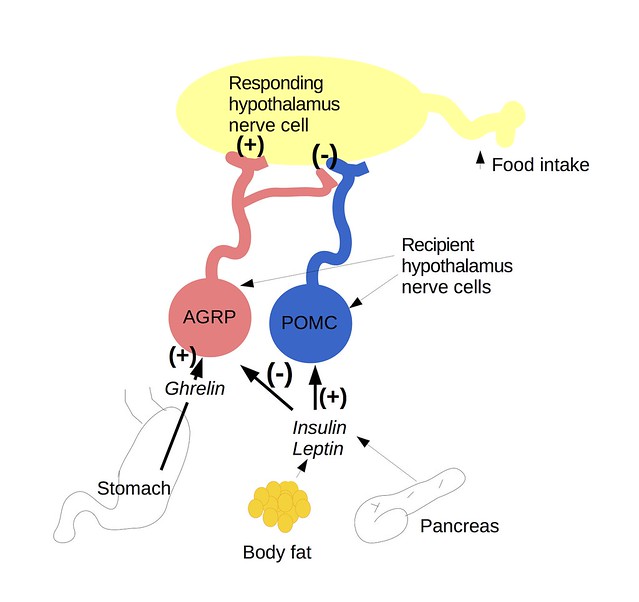 So you can imagine that one way in which microbes may be able to influence our sense of fullness or cravings for foods is by regulating our hunger hormones. Indeed, people who have the bacteria Helicobacter pylori in their stomachs have substantially lower levels of ghrelin in the bloodstream [3]. There is also evidence that people who take antibiotics to eradicate H. pylori , also associated with stomach ulcers, are more likely to put on weight in the six months following treatment [4]. This may be due to other side-effects of antibiotic treatment, but in countries with a lower fraction of the population with H. pylori in their stomachs also tend to have higher levels of obesity (Figure 3). Moreover, the prevalence of H. pylori infection has decreased in recent decades [5]. Together, these results have led to the hypothesis that the loss of this organism from our microbiota might contribute to the modern obesity epidemic [4]. And my stomach rumbling! 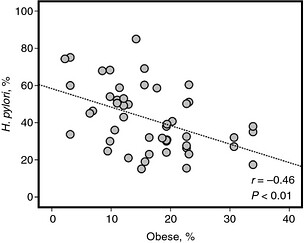 Fig. 3 Plot showing a correlation between the fraction of the population who is obese and the fraction infected with Helicobacter pylori. Each point represents a country, so countries with the highest fraction of obese citizens also have the lowest fraction of people with H. pylori in their stomachs. Note that because this is a correlation rather than the results of an experiment, the results alone do not prove loss of H. pylori causes obesity. Figure reproduced from [4] with permission. Copyright belongs to Wiley.

Recently, researchers have found evidence to suggest that waste-product compounds, such as acetate, emerging from bacteria growing in the low-oxygen conditions in the intestines, can stimulate hunger and induce obesity [6]. When the microbes in a mouse gut were killed with antibiotics, the researchers found that substantially less acetate was produced, and this coincided with a reduction in the sugar storage hormone insulin [6]. The authors then demonstrated that the acetate produced by the bacteria could by itself cause an increase in insulin levels and weight gain by injecting the stomachs or brains of the mice with acetate. The researchers subsequently cut the vagus innervation responsible for transmitting messages between the gut and the brain, and this prevented the previously observed insulin rise when acetate was added. Therefore, it appears that acetate produced in the gut and sent to the brain can change your appetite – at least if you’re a mouse [6]!

This is in no way to say that your gut microbiota is a bad brainwashing machine. It seems able to also help you make “good” decisions when it comes to eating. For instance, mice which lack any gut microbes were found to drink more of a high-concentration sugar solution than their microbe-filled counterparts [7]. If binge eating when stressed and at super awkward social events is your thing, then your gut microbiota may also indirectly help you avoid such resolution-busting moves by producing happy or calming signaling molecules. For instance, the bacterium Lactobacillus rhamnosus produces large quantities of the inhibitory neurotransmitter GABA, which is associated with reduced anxiety and depression. Mice who were fed broth enriched with this bacteria showed fewer anxious behaviours than those without the bacterium, spending more time in open areas of a maze and taking longer to give up when forced to swim in a column they could not escape from [8]. However, the authors also note that other bacteria and other neurotransmitters may have been important for the reduced anxiety they observed, so don’t go wolfing down Lactobacillus rhamnosus quite yet!

Given that we started with failed New Year’s resolutions, you might be wondering how trying to rescue that resolution with a crash diet might affect your health and gut microbes. Kaakoush and colleagues found that rats fed an alternating diet of high-fat junk food and healthy lean chow showed smaller increases in body weight, fat mass, and fat hormone (leptin) production than those which only ate junk food, although their gut microbiota were indistinguishable [9]. So while you may be able to get a leaner physique if you try to turn around your diet, your microbes will still remember what you did last night!

NOTE: I am in no way a doctor or providing medical advice. It is important to note that your gut microbiota plays vital roles in making vitamins and minerals you cannot produce, keeping your gut healthy, and protecting you from numerous infectious disease-causing agents. And exactly how it does so is not completely understood.

[5] Nakajima, Shigemi, Yorihiro Nishiyama, Miyoko Yamaoka, Takashi Yasuoka, and Eisai Cho. “Changes in the prevalence of Helicobacter pylori infection and gastrointestinal diseases in the past 17 years.” Journal of gastroenterology and hepatology 25, no. s1 (2010): S99-S110.

« Why Do Mothers Mother?
Archive
When It Comes to Bird Beaks - Size Matters »