Are humans starting a new fiery relationship with nature in wetter climates?

Wildfire is an amazing force of nature. It can burn through thousands of acres of trees, forcing people and other animals to flee in its path (Figure 1). While fire is well known for its destructive power, it also has an amazing ability to bring new life. Fire releases nutrients back into the soil, and provides new habitat for plants and animals to thrive. In fact, some plants and animals need fire to survive. But what does fire need to survive? What is fire’s ecological niche and how has this changed since wildfire made its first appearance on Earth 420 million years ago?

An ecological niche refers to the conditions under which a plant or animal can live. (Disclaimer: there are many other ways to define an ecological niche!) For plants, these environmental conditions are often defined in terms of climate (e.g. rainfall and temperature). For example, a cactus might live in a desert with low rainfall and high temperatures. Too much rain, and the cactus drowns. Too little rain, and it dries up. Too cold and the cactus might freeze, too hot and it’ll dry out. This climate space can be plotted where light colors show any acceptable habitat, and dark colors defining the best habitat for the cactus (Figure 2a). The same can be done for other organisms, such as a fern, that prefers high rainfall and cool temperatures (Figure 2b). 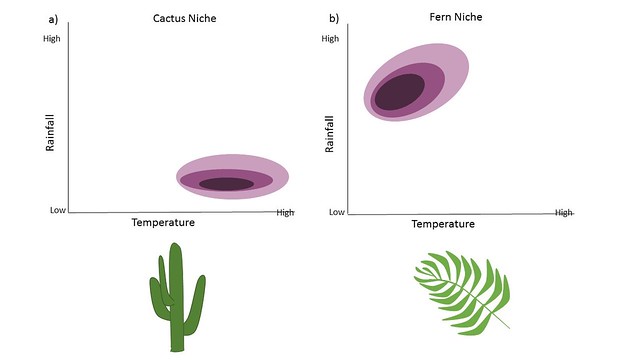 Fig. 2 An ecological niche for plants can be defined by temperature and rainfall. Cacti (a) and ferns (b) require different climate conditions, denoted in purple, to survive. Image Credit: Emily Fusco.

Like these plants, and other living organisms, fire needs certain resources to exist. These resources are fuel, heat, and oxygen. Fire made its first appearance on Earth about 420 million years ago, during the Silurian period. This time was ideal for fires as it coincided with both the appearance of the first land plants (providing fuel), and a near doubling of atmospheric oxygen. The first fires were likely ignited by lightning or volcanoes. Naturally ignited wildfires have remained on the landscape as an important part of nature for millions of years.

However, by about 50,000 to 100,000 years ago, humans had evolved, and they had mastered the use of fire [1]. Many argue that the arrival of mankind marks a new period of the Earth’s history called the Anthropocene. This period is defined as a time when human influences dominate the landscape. In terms of fire, we light matches, build campfires, and send electricity through high voltage power lines. All of these things can provide the heat needed for fire ignition. This means that our wildfires are not just caused by lighting anymore. In fact, more than 80% of wildfires in the US are caused by people [2]!

But do those fires started by people in the US occupy a different ecological niche than those started by lightning? Are people bringing fire into new types of habitat? How is fire’s niche changing in the human dominated landscape of the Anthropocene?

Under the leadership of Dr. Jennifer Balch, a researcher at the University of Colorado Boulder, I, and a number of my pyro-minded colleagues, used a dataset of over 1.5 million wildfire records in the US to plot human and lightning caused wildfires in the same way other scientists often plot plant and animal niches. We know that fire needs oxygen, fuel, and heat. Oxygen is relatively constant across Earth, so we defined fire’s ecological niche in terms of the other two dimensions–ignition and fuel. For us, that meant lightning strikes and fuel moisture. Low fuel moisture means that plants are present and dry, making them more susceptible to wildfire. We found that fires ignited by lightning tend to happen in areas with many lightning strikes, and dry fuel, as is shown by the dark red color in Figure 3a. On the contrary, people start wildfires in places with few lightning strikes and higher fuel moisture. This is shown by the shift in the darker red and orange pixels down and to the right in Figure 3b. For the US, this means that fires are no longer confined to areas where lightning coincides with dry conditions (like in the Western US), but may also occur when there is little lightning and any range of fuel moisture conditions as was seen in the Chimney Tops 2 fire that burned into Gatlinburg TN in 2016. 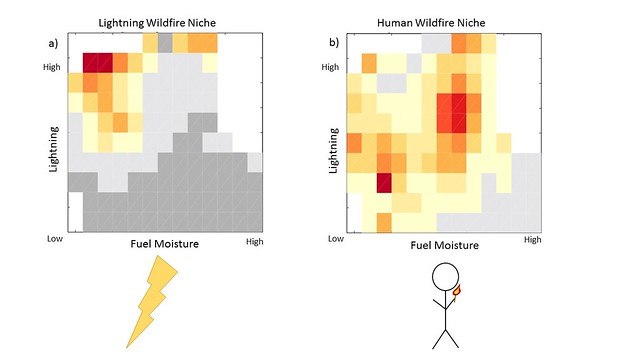 We can look outside our windows and see roads, houses, shops, and farm fields and know that people are undoubtedly changing the landscape. However, seeing the impacts of humans on wildfire can be a bit more difficult. By showing the impacts people have on wildfire’s niche, there is no question that people are changing the game when it comes to how wildfire exists on the landscape.

« When a Wall is just a Wall
Archive
Why Do Mothers Mother? »