“You may have heard the Earth called the blue marble, but do you know why the world is also green?”

Try image searching nature, ecosystem, ecology, or any variation of these words. Better yet, if you live near a natural setting (and it isn’t too far into those dreaded cold seasons) just look out your window. Do things look particularly… green? Even if we take a look at the world itself, it is overwhelmingly green (Figure 1). Have you ever wondered why? Fig 1. When NASA first took photos of the Earth from space, it was called the “Blue Marble.” But when you exclude the oceans, we see that the world is actually very green. Photo Credit : NASA via Wikimedia Commons

In the most obvious sense, the world is green because it is covered in plants. But why are plants green? Plants are green because they have chlorophyll in their leaves, which they use to absorb sunlight and create their own energy. Sunlight reaches Earth in various wavelengths that correspond to various colors (Figure 2), and objects appear different colors based on which of these wavelengths they fail to absorb. If a wavelength is not absorbed, it is reflected. This reflected light is the color we see. Since chlorophyll isn’t particularly good at absorbing green light, it reflects it, giving chlorophyll, and therefore plants, their green color. So instead of asking why the world is green, a better question may be, why are there so many plants? At least relative to many other living organisms. 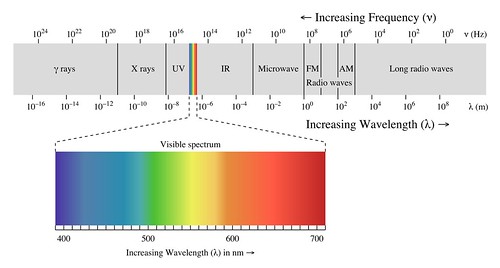 Fig. 2 The electromagnetic (em) spectrum shows the range at which light can exist. We can only see light in the visible spectrum. Chlorophyll does not do a good job absorbing green light, and therefore it, and the plants it is in, appear green. Photo Credit : Adapted from Wikimedia Commons

In 1960, scientists Hairston, Slobodkin, and Smith, noticed this as well and offered an explanation for why the world is so green [1]. “The world is green hypothesis” (or the HSS hypothesis, for the authors’ names) focused on the food web to lend an explanation (Figure 3). A simple and standard food web is made up of producers (plants), primary consumers (herbivores), and secondary consumers (predators). These food webs can be complicated and a few key predators typically sit at the top of the food web in each ecosystem. The organisms in a food web interact; the herbivores eat the plants, and the predators eat the herbivores. So why don’t our hungry herbivores eat all of the plants, and leave the world a brown and barren place? It probably isn’t that the herbivores are watching their figures. Instead, the world is green hypothesis suggests that herbivores would eat all the plants… if they could. However, predators do a great job of eating herbivores. Therefore, there is control from the top of the food web down to the herbivores that keep their populations in check. Since there is control over herbivore populations, the plants can flourish since they will not be eaten!

Let’s consider an example with rabbits. They are herbivores that are happy to eat all sorts of green things, from grass, to weeds, to wildflowers (Figure 4). Normally, their populations are controlled by predators such as foxes and hawks. Once these rabbits are eaten, they no longer need a lunch of their own. This means more plants can survive. However, if rabbits are introduced to an island, for example, with no natural predators, they could do real damage to the native plant life if they exist in large enough numbers.

Fig 4. This rabbit is chowing down on some green. Image Credit: Wikimedia Commons

The world is green hypothesis is a classic example in ecology of top down control of ecosystems, and many scientists still find support for this hypothesis today. However, as with many great hypotheses in ecology, it paved the way for more great ideas to explain our natural world.

So the next time someone asks you “How much wood would a woodchuck chuck?” You can try answering: “A woodchuck would chuck all the wood a woodchuck could chuck, before he is eaten by a predator in a top down controlled ecosystem.”