When a loud, invasive frog species acoustically overpowers native frog calling, important communication can be blocked. Then what?

If you’ve ever passed by a pond on a warm spring or summer evening, you’ve undoubtedly heard the loud sound of breeding frogs. Whether you realized it or not, you were overhearing a remarkable mixed-species chorus of frogs, all using sound to navigate the crowded pond in the dark and to find potential mates of their own species. To our ears, it sounds like a racket – but to the frogs, this racket is orchestrated in such a way that allows for successful intraspecific communication (communication between members of the same species).

…or at least, that is how the system evolved over many, many generations – before humans began introducing loud highways, industrial noise, and other obstacles to vocal communication into the environment. Have you ever tried to chat with a friend while a car alarm is going off in the background? Or near a passing train? It’s a challenge, and frogs face that same challenge. As environmental noise conditions change, frogs may be forced to alter their calling behavior in response to real-time noise conditions. If acoustic communication systems are challenged by newly introduced sounds, then frogs may have trouble finding mates and whole populations could become threatened.

Another threat is the introduction of new biological noise sources in the form of invasive species. Due in large part to our shipping and transport industries, foreign species have ended up being moved accidentally all over the globe. And when a new, vocally active species arrives into an existing acoustic community (group of interacting species together in space and time) such as a frog chorus, that careful organization of acoustic space may be challenged.

Biologists Jennifer B. Tennessen, Susan E. Parks, Travis P. Tennessen, and Tracy Langkilde recently explored this idea in a study published in the journal Animal Behaviour [1]. Interested in how native communities are affected by invasive species, they asked specifically how novel biological noise can impact a highly vocal native community. To study this, they looked at the invasion of the Cuban Treefrog (Osteopilus septentrionalis) into the Southeastern U.S. (Fig. 1). 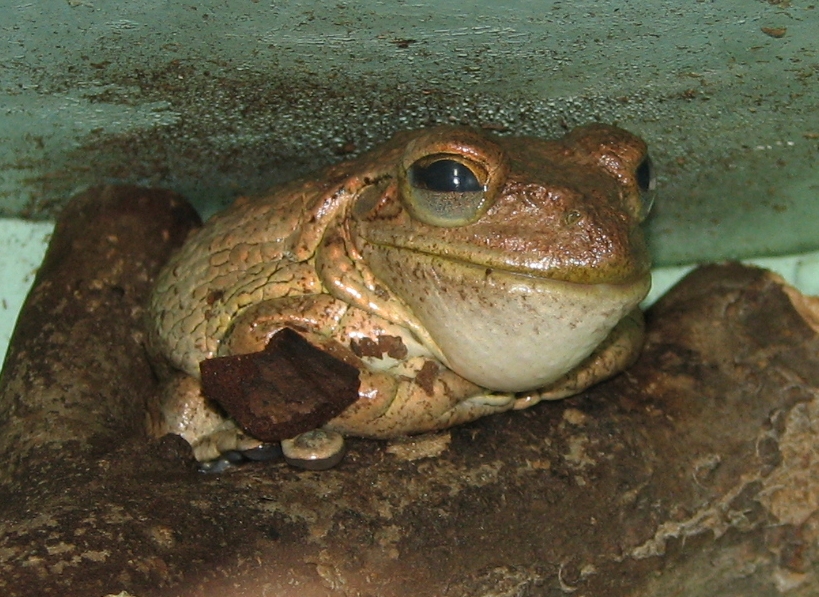 Native to Cuba, the Bahamas, and the Cayman Islands, the Cuban Treefrog hitched a ride to Florida most likely by shipping for the garden industry, and spread northward by the trading of ornamental plants. Their nocturnal breeding call is loud and has been described as a “grating squawk” [2]. The Cuban Treefrog is thus not only putting new competitive pressure on native species for physical resources within the landscape (i.e. food, habitat), but also for acoustic space within the soundscape (ability to hear and be heard). In other words, the squawking call of an introduced Cuban Treefrog may interrupt or mask the calling of native frogs, compromising their system of communication or pushing them to alter their calling behavior. To test this hypothesis, two frog species native to the Southeastern U.S. – the Green Treefrog (Hyla cinerea) and the Pine Woods Treefrog (Hyla femoralis) – were used as focal native species in the study (Fig. 2).

The researchers conducted nighttime experiments in frog ponds in the Southeastern U.S. They placed speakers with pre-recorded Cuban Treefrog calling close to a vocalizing native frog (Green Treefrog or Pine Woods Treefrog), and monitored the response of the native frog. Two different white noise control treatments were also presented, to help tease apart the causes of any potential behavioral changes by providing non-biological forms of sound interference for comparison.

What did the researchers find? Well, they found support for their hypothesis! The grating squawk of the invasive Cuban Treefrog is altering Green Treefrog communication due to competition. Specifically, Green Treefrog calls were shorter and louder when the Cuban Treefrog calls were playing – this suggests that Green Treefrogs were changing their behavior in response to real-time competition within the acoustic environment. Such a response was not seen in the Pine Woods Treefrog, as predicted. The different species responses likely reflect their different acoustic niches.

This study adds to the growing body of work documenting the widespread effects of invasive species on native communities, and highlights an aspect of invasion biology that may not always be obvious. In highly vocal native communities, acoustic competition from introduced species can alter behavior, which may have fitness consequences. And while this study documented such an effect in just one acoustically overlapping invasive-native pair, it’s likely that this same effect is taking place across the many acoustic communities affected by biological invasion.